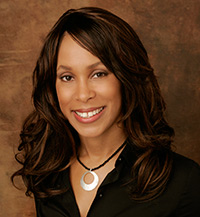 Visiting Assistant Professor Channing Dungey, a UCLA School of Theater, Film and Television alumna and a key figure in the development of the School's Producers Program TV specialization, made news earlier this week when she was named ABC Entertainment Group president, instantly becoming the first African American to lead a major TV network.

"Channing is a gifted leader and a proven magnet for top creative talent, with an impressive record of developing compelling, breakthrough programming that resonates with viewers," Sherwood said in a statement.

"I'm thrilled and humbled that Ben has entrusted me with this tremendous opportunity," Dungey responded, "and I am truly grateful to Paul for being a valued mentor and friend. I've had the great honor of working alongside the talented team at ABC for many years and look forward to starting this exciting new chapter with them."

Dungey joined ABC Entertainment Group as a senior vice president, drama development in 2009, and in 2013, was named executive vice president, Drama Development, Movies & Miniseries. In that role, she oversaw the development and production of all drama pilots, movies and miniseries, and the launch of new ABC Entertainment series such as Scandal, Marvel's Agents of S.H.I.E.L.D., How to Get Away With Murder, American Crime, Once Upon a Time, Secrets and Lies and Nashville.

Dungey began her successful career in entertainment as a development assistant for Davis Entertainment and later worked at Steamroller Productions and Warner Bros. as a production executive.

The response to Dungey's promotion has been overwhelmingly positive.

Rick Rosen, partner and head of television at talent agency William Morris Endeavor, commented to the Los Angeles Times that Dungey "is very bright and very well-regarded" in the entertainment community, while another unnamed executive said that "she's one of those good people that you always root for. She's the smartest person they've got."

Dungey has taught graduate students at UCLA TFT for nearly a decade and is a founding member and current board member of Step Up, a national non-profit membership organization dedicated helping girls from under-resourced communities fulfill their potential.