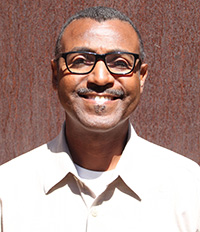 Tony Fitzgerald received a master’s degree in theatre arts from Cal State Los Angeles and his Ph.D. in performance studies and theater from the UCLA School of Theater, Film and Television. His focus is African American theater and performance, African American studies and LGBTQ studies. His dissertation was on contemporary Black gay performance. Amongst his well-received conference papers are “Civil Sex: The Life of Modern Black Gay Activist Bayard Rustin” and “Minstrelysed Images in Suzan-Lori Parks’ Topdog/Underdog.” While studying at UCLA TFT, Fitzgerald was the recipient of several theater department awards including the Executive Board Award in 2009 and a University Fellowship in 2010.

Fitzgerald’s theater practitioner work is as a dramaturg. He has been the dramaturg for several professional as well as college productions. In 2008, his work for Jose Cruz Gonzalez’ The Cloud Gatherer helped the production to be recognized in several categories at the Kennedy Center American College Theater Festival. His other credits include: Kiss of the Spider Woman, The House of Bernarda Alba, Liberty, Oregon and The Houseguest from Xinjiang. His work with Cornerstone Theatre Company's education director Debra Piver generated a research project based on their education program “Literature to Life” in which the works of local community personalities were adapted to the stage and performed before high school students. One such work, which dealt with the Armenian genocide, was Leon Surmelian’s autobiography I Ask You, Ladies and Gentlemen.