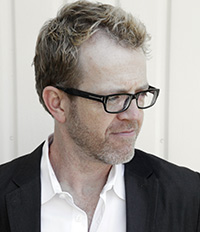 Voiceover actor Scott Brick teaches Acting for the Microphone to undergraduate and graduate students in the Department of Theater. He has recorded bestsellers and Pulitzer-Prize winning books for every major publisher, more than 700 titles since his debut in 1999, including Mystic River, Fahrenheit 451, In Cold Blood and Helter Skelter.

In addition to more than 50 Earphones Awards, he’s also received three Audie Awards, including two for his work on the Dune saga. In 2004, Audiofile magazine named Brick “one of the fastest-rising stars in the audiobook galaxy” and proclaimed him a Golden Voice, and his work was thereafter profiled in The Wall Street Journal, the Los Angeles Times and Entertainment Weekly.

In 2012 Publisher’s Weekly named Brick their Audiobook Narrator of the Year for the second time, and his work on the multi-voice recording of The Mark of Zorro was nominated for a Grammy. An active and passionate teacher, Brick recently wrote a detailed, multi-media analysis of the narration process called Narrating Audiobooks Brick by Brick, debuting soon. In addition, Brick just completed work on his first novel, a supernatural thriller based on an 18th-century murder in New England.