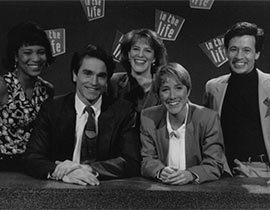 Two years in the making, UCLA Film & Television Archive has launched a new, digital LGBT research portal that will serve as an informative and entertaining resource for educators, researchers and the general public.

A wealth of materials and videos, including comedian Kate Clinton's "coming out" remembrance, coverage of the watershed 1993 march on Washington and the story of murdered transgender teen Fred Martinez are now publicly accessible online as part of a new lesbian, gay, bisexual and transgender moving image research area featuring episodes of the Emmy-nominated LGBT public television series In the Life.

In addition to episodes from the TV program, the portal also features other contextualizing material, including a commissioned essay, "The Time of Our Lives: In the Life – America's LGBT News Magazine," by Stephen Tropiano, Ithaca College; an oral history with seminal indie filmmaker Pat Rocco; a lecture by LGBT scholar Lillian Faderman; and a list of LGBT media, history and advocacy resources.

The portal's launch, which is part of the UCLA Film & Television Archive's 50th anniversary celebration, builds on its previous efforts with the non-profit Outfest through the Outfest UCLA Legacy Project. The Legacy Project, founded in 2005, works to preserve both the history and the future of LGBT moving image materials by convening symposia, educating filmmakers about proper stewardship of their work, restoring materials that are at risk and encouraging the use of collection materials — which now number more than 35,000 titles.

"Preserving and providing public access to LGBT media materials is important not only for scholars, researchers, filmmakers and historians worldwide but also for the broader society," said Jan-Christopher Horak, director of UCLA Film & Television Archive.  "This new initiative with In the Life builds on the Archive's longstanding commitment to underrepresented communities, including the LGBT community."

Created by John Scagliotti in 1992, In the Life began as a variety-type show, but quickly evolved into a news magazine format, becoming an award-winning and respected source for LGBT journalism at a time when lesbian, gay, bisexual and transgender people were often invisible in media.  Produced by In The Life Media, the series was the first — and remains the only — LGBT news magazine broadcast on public TV.  In the Life ran in more than 200 markets around the country; its final episode aired in December 2012.

The Archive has 15 seasons of the show available online now.  All 21 seasons — along with outtakes, interviews and other significant video content — will be available this fall.

The In the Life online initiative was funded by the Estate of Ric Weiland (managed by the Pride Foundation), the Arcus Foundation and Henry van Ameringen.  Weiland was a noted computer software pioneer and dedicated philanthropist.  He was one of the first five employees of Microsoft Corporation and left the significant majority of his estate to support LGBT organizations across the nation and globe.  The Arcus Foundation, founded in 2000 by Jon Stryker, is a leading global foundation advancing pressing social justice and conservation issues.

"I am immeasurably proud of the critical role In the Life played in the LGBT movement," said van Ameringen, a board member of In The Life Media and a philanthropist whose main interests lie in the LGBT community and in mental illness and mental health.  "We're committed to preserving this invaluable resource and maximizing access to it with an online presence that will continue to advance equality in new and innovative ways."