Design Showcase West, spotlighting the work of graduating student designers, is about to get under way 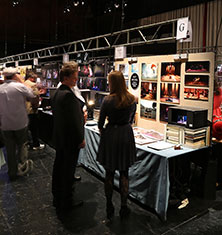 The stage is set for the 13th annual Design Showcase West, taking place at the UCLA School of Theater, Film and Television’s Freud Playhouse on Saturday, June 6. Students graduating from the nation’s top university design programs will convene to showcase their work for producers, directors, professional designers and the general public at the only national entertainment design showcase on the West Coast. Emmy Award-nominated writer-producer Bill Prady (The Big Bang Theory) will be the event’s guest speaker.

Prady is the executive producer and co-creator, with television veteran Chuck Lorre, of CBS’ The Big Bang Theory. His latest project, set to premiere on ABC this fall, is the half-hour comedy The Muppets, a more adult, contemporary and documentary-style show that, for the first time, explores the personal lives of the Muppets.

The Swarovski Shooting Star Award for Excellence in Costume Design, which includes a cash prize and a crystal award, is annually conferred upon a UCLA TFT costume design graduate student who has shown exemplary strides in his/her work. It will be presented this year to second-year M.F.A. candidate Adam Alonso, who graduated with a B.A. in theater arts from Loyola University New Orleans and worked as the costume director for New Orleans’ Jefferson Performing Arts Society before arriving at UCLA TFT.

Design Showcase West is hosted by the UCLA School of Theater, Film and Television’s Department of Theater and distinguished members of the Art Directors Guild Local 800, United Scenic Artists Local 829, Costume Designers Guild Local 892 with the support of the Set Decorators Society of America and the Motion Picture Costumers Local 705.

This event is also made possible through the support of Industry Producer and Educational Partners: Sync On Set, International Silks & Woolens, Dodge College of Media Arts at Chapman University and University of Missouri, Kansas City.