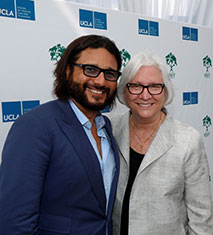 On Tuesday, May 19, the Mohamed S. Farsi Foundation (MSFF), a London-based grant-making foundation funding charities and social enterprises around the world, announced the launch of a new program, Arab Women Filmmakers, to achieve greater representation of women, particularly Arab women, in the film industry.

Its first signature initiative is a partnership with the UCLA School of Theater, Film and Television (UCLA TFT). Together they have created the Hani Farsi Graduate Scholarship Fund, which includes three new four-year, full-ride graduate scholarships for UCLA TFT's Master of Fine Arts in Directing designed "to give voice to the unique perspective of Arab women." The Hani Farsi Graduate Scholarship Fund recipients have been selected from an outstanding pool of applicants who will begin their M.F.A. graduate program at UCLA TFT in Fall 2015.

While this scholarship fund and partnership with UCLA TFT are important steps toward addressing the imbalance within the entertainment industry, they are simply a start. The objective of the Arab Women Filmmakers program is for like-minded individuals and organizations to collaborate with MSFF and attain more diversity within the film industry.

Arab female directors have unique stories to tell but are underrepresented in the entertainment industry. The few women who have told their stories have received critical acclaim for their films. These include Lebanese director Nadine Labaki's Where Do We Go Now; Saudi Arabia's Haifaa Al-Mansour's BAFTA nominated Wadjda; Jordanian director Cherien Dabis's May in the Summer; Jehane Noujaim's documentary The Square, the first Egyptian-made film to be nominated for an Academy Award; and Palestinian filmmaker Annemarie Jacir’s like twenty impossibles, the first short film from the Arab world chosen as an official selection at the Cannes Film Festival, and Salt of this Sea, the first Palestinian feature film by a female director to be a Cannes official selection.

Arab women filmmakers talk about the importance of the new MSFF partnership with UCLA TFT:

The UCLA TFT Directing program is devised to develop artists in film, television and digital media with an emphasis on humanistic visual storytelling. The program is focused on the power of story to not only delight and entertain, but to enlighten, engage and inspire change for a better world.

"We want these scholarships to be a catalyst, to capture the imaginations of future filmmakers, and to inspire them to reach their goals," said Hani Farsi, Chairman of the Mohamed S. Farsi Foundation. "This partnership with the UCLA School of Theater, Film and Television represents the first step in a call to action, which we hope will lead to a positive change for women in the film industry and in my part of the world."

"We are greatly honored to be the inaugural home for the Hani Farsi Graduate Scholarship Fund to give voice to the unique perspective of Arab women," said Teri Schwartz, Dean of UCLA TFT. "We share Hani's belief in the power of entertainment and performing arts education to give access and opportunity to an outstanding cohort of diverse new storytelling voices. With the Hani Farsi Scholarship Fund for the M.F.A. in Directing, we have the unique chance to nurture and empower an exciting new generation of extraordinary filmmakers — in this case, Arab women — who will make a difference in the world by illuminating and enriching our lives with a powerful array of new stories that might not have had a chance to be told if not for Hani's generosity and transformational vision."

NOTE: As of April 2018, this scholarship has been endowed for future generations and is now known as the Hani Farsi Endowed Graduate Scholarship Fund.