The Art of Fashion returns to San Diego 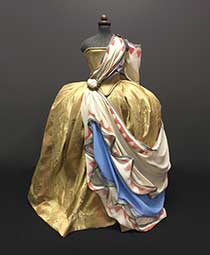 On the evening of Monday, April 20, San Diego’s Timken Museum of Art will host the 8th annual Art of Fashion 2015 fundraiser gala. Eight graduate costume design students from the UCLA School of Theater, Film and Television, Kumie Asai, Charlotte Ballard, Chanele Casaubon, Lauren Cucarloa, Jenny Davis, Naomi Gonzalez, Molly Irelan and Ruoxuan Li, and two undergraduate students, Learon Inbar and Darya Shkipina, created costumes, in competition, that were inspired by Claude-Joseph Vernet’s oil-on-canvas painting A Seaport at Sunset (1749), on display at the Timken. The winner of the competition will earn a $5,000 scholarship.

More than 200 fashion enthusiasts from throughout Southern California will attend Art of Fashion, led by honorary chair Dame Zandra Rhodes, international fashion icon and designer. Organizers aim to raise $100,000 at this year’s event, with proceeds supporting the Timken’s outreach programs.

Prior to the gala, Rhodes and an honorary committee of fashion-forward and civic-minded female philanthropists will judge the student designs at an exclusive private luncheon in the museum, which includes remarks by Professor Deborah Nadoolman Landis, Ph.D., founding director of the UCLA TFT David C. Copley Center for Costume Design. At the luncheon, Landis will reveal the competition criteria and discuss each design.

Last year, two UCLA TFT graduate costume design students, Adam Alonso and Caitlin Doolittle, were announced as the winners of Art of Fashion 2014: A Design Competition. Their designs were inspired by Thomas Gainsborough’s “A Peasant Smoking at a Cottage Door,” which was featured in the Timken exhibit “Object Lessons: Gainsborough, Corot, and the Landscape of Nostalgia.”

Art of Fashion guests will have the opportunity to speak with the designers about their creations and to see up close the winning designs from last year’s gala as well as those from previous Art of Fashion events.

In A Seaport at Sunset, Vernet depicted an idealized Mediterranean seaport, rather than a specific location, and used a variety of features from the region. The lighthouse can be found in Naples; the Arch of Constantine in Rome. The lateen-rigged ship seen on the right side of the canvas is common to the eastern Mediterranean, while nearby ships fly the Dutch flag, an indication that a Dutch client may have commissioned the painting.