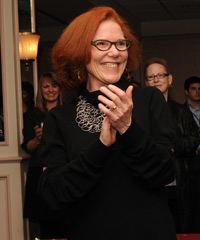 Dean Schwartz selected McHugh, who has been on the Department of English and Cinema and Media Studies faculty since 2002, in consultation with Film, Television and Digital Media Chair William McDonald and Department of Theater Chair Michael Hackett, along with other members of the Dean’s leadership team.

“I firmly believe that a strong, excellent and sustainable community must be one built upon fundamental core values of diversity and inclusion,” Dean Schwartz says. “I could think of no one better or more brilliantly qualified to take on the important work of this new position than Kathleen. She will be a great leader for UCLA TFT's diversity initiatives with our goal of becoming a gold standard model of diversity for UCLA. The Chancellor and Provost have made diversity the top initiative for this year and beyond; we are well aligned with campus goals.”

From 2005-2014, McHugh successfully directed the UCLA Center for the Study of Women, expanding its mission, external funding, research and public programs. She has also been active in campus equity, climate and diversity issues. McHugh, who is the author and editor of three books as well as numerous other articles, focuses her research on the blending of affect and politics in film genres, from melodrama to experimental film, and in films made by women such as Jane Campion (The Piano), Cheryl Dunye (Stranger Inside) and Lourdes Portillo (Señorita Extraviata). She is currently researching the role of mental illness in such contemporary genres as police procedurals, political thrillers and science fiction.

The attention to diversity, in all of its complex forms, is one of the highest priorities for UCLA, Dean Schwartz and the School of Theater, Film and Television. To that end, the role and work of the Associate Dean for Diversity and Equity will be comprehensive. McHugh will work with Dean Schwartz, department chairs, faculty, staff and students to generate far-reaching diversity policies and procedures that are inclusive and that inspire the UCLA TFT community. Among other priorities, she will create policies and activities that will articulate best practices for searches, recruitments and retentions, as well as graduate student admissions and advancements in an inclusive and supportive climate.

“UCLA has made diversity an institutional priority and I am delighted to be a part of this initiative,” says McHugh. “The creation of this position and its counterparts is an exciting next step in UCLA’s commitment to academic excellence. The ADDE network will be able to respond quickly to policy, procedure and administrative issues, liaise directly with the Vice Chancellor's Office for Diversity, Equity and Inclusion, and most importantly, provide a central office in the School of Theater, Film and Television through which to articulate and implement the School's fundamental commitment to diversity and equity. My number one goal is to consult with the dean, chairs, faculty, staff and students to generate diversity policies from the ground up that facilitate everyone's participation and endorsement.”