The costumes from iconic Hollywood films are ready for their close-ups as Hollywood Costume opens in L.A. 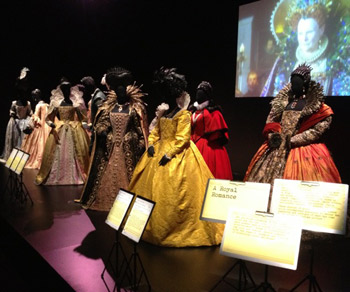 Two years after opening to great fanfare in London, the celebrated Hollywood Costume has arrived in Los Angeles and rolls out the red carpet beginning Thurs., Oct. 2 at the Wilshire May Company Building, the future home of the Academy Museum of Motion Pictures.

Hollywood Costume is a rich multimedia presentation that showcases costumes from a mix of 126 iconic and crowd-pleasing films including “Vertigo,” “The Seven Year Itch,” “My Fair Lady,” “Star Wars,” “Pretty Woman,” “Shakespeare in Love,” “Titanic,” “Gladiator,” “Avatar” and “Man of Steel,” among many others.

Presented in Los Angeles by London’s Victoria and Albert Museum and the Academy of Motion Picture Arts and Sciences, Hollywood Costume is the brainchild of veteran costume designer Deborah Nadoolman Landis, professor and director of the David C. Copley Center for the Study of Costume Design at the UCLA School of Theater, Film and Television. Five years in the making, Hollywood Costume opened in London in October 2012 before making stops in Melbourne, Australia; Richmond, Va.; Phoenix, Ariz., and now, Los Angeles, Calif.

Hollywood Costume features the creations of 83 costume designers (30 of them Academy Award winners), with 150 costumes from 64 international collectors, on display in four adjacent galleries, enhanced by montages, animation, film clips and video projections. Each tells the story of costume design from the early 20th century (Charlie Chaplin’s The Tramp,” 1912) to the present (“The Great Gatsby,” 2013). Landis’ own handiwork, the iconic fedora and leather jacket that defined Indiana Jones in “Raiders of the Lost Ark,” is also part of the exhibition. Adding to the allure is video commentary from the celebrated actors, directors and costume designers involved in many of the projects represented, commenting on the vital role that costume design plays in creating a story.

The Academy of Motion Pictures Arts and Sciences has contributed costumes from its own collection for the Los Angeles show, including those from “The Hunger Games” and “Django, Unchained,” as well as the most famous shoes in the world, the original ruby slippers from “The Wizard of Oz,” shown with Dorothy’s iconic blue and white gingham dress.

“The last survey exhibition of costume design with this scope was Diana Vreeland’s at the Met in 1974,” Landis says. “This isn’t hyperbole: What you see here is a once-in-a-lifetime collection of clothing.”

Hollywood Costume is organized by the Victoria and Albert Museum, London; Swarovski is the presenting sponsor.