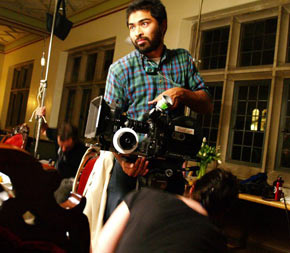 “It was one of the greatest experiences because we had all-access passes to everything. We got into industry parties, and we rubbed elbows with award-winning directors including Steve McQueen at the premiere of ‘12 Years a Slave.’ Being a FilmLAB fellow educated us about films in a big way. Everything about it was very educational — and very fun,” he says, referring to the Telluride and UCLA TFT partnership, co-founded in 2010 by Dean Teri Schwartz and Telluride co-director Julie Huntsinger, in which 10 select UCLA TFT graduate film students learn from prominent filmmakers, enjoy exclusive sessions with world-renowned writers, producers and industry leaders, and experience the festival like VIPS. Producer and executive board member Frank Marshall (BA, ’68), who was the symposium’s founding sponsor, continues to be a faithful supporter of the annual event.

Columbus returned to Telluride in 2014 as a filmmaker whose short narrative drama, “Guests,” premiered at the 41st edition of the fest, which started on Friday, Aug. 29. The film was one of six featured in the Student Prints portion of the festival, curated and introduced by filmmaker and UCLA TFT alum Gregory Nava (BA, ’71). The following afternoon, Saturday, Aug. 30, Columbus was a VIP guest at UCLA TFT’s reception celebrating the festival filmmakers, co-hosted by Huntsinger and fellow Telluride director Tom Luddy, The Hollywood Reporter and Vimeo, at the Telluride Gallery of Fine Arts. 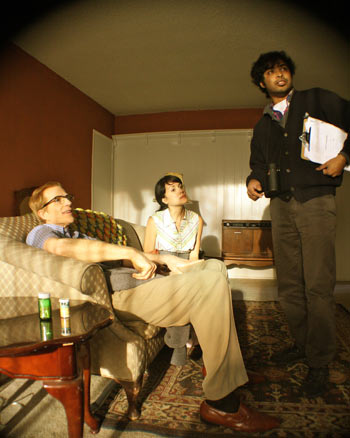 Among the other filmmakers at Telluride this year was Oscar-winning director and UCLA TFT board member Martin Scorsese, who screened his documentary, “The 50 Year Argument,” about the history and influence of the New York Review of Books. “Apocalypse Now,” the seminal film from Oscar-winning director and UCLA TFT board member Francis Ford Coppola (MFA, ’67), received the Silver Medallion Award. This was the first time the fest has given the honor to a film, which is usually reserved for an artist’s “significant contribution to the world of cinema.” Coppola, “Apocalypse” co-producer and UCLA TFT alum Fred Roos (BA, ’56), editor Walter Murch, DP Vittorio Storaro and writer John Milus were on the panel that followed the screening. Additionally, UCLA TFT alum Alexander Payne (MFA, ’90) conducted a conversation with filmmaker and fellow UCLA TFT alum Carroll Ballard (BA, ’63) after four of Ballard’s short films were screened at a special Saturday night event entitled “Carroll Ballard: Seems Like Only Yesterday.”

Columbus follows other UCLA TFT students and alumni who have screened films at Telluride including Battiste Fenwick (MFA, ’12) and Esther Julie-Anne (MFA, ’13) who, last year, became the first married couple in Telluride’s then 40-year history to show two separate projects in the same year. Their respective thesis films, “Una Chanza Más” and “Out of Love,” were shown together as part of the Great Expectations portion of the festival.

Columbus’ “Guests,” a melancholy 12-minute tale about a young boy who is forced to grow up, was created in actor and visiting professor James Franco’s Adaptation and Collaboration class last year, as one of eight short films, each helmed by a student director. Adapted from author Robert Boswell’s collection of stories in “The Heyday of the Insensitive Bastards,” the narratives were later merged into a feature-length film of the same name.

Thanks to Franco’s Hollywood connections, “Guests” stars actors Matthew Modine and Rico Rodriguez (“Modern Family”). Modine portrays a cancer-ridden father; Rodriguez is his quiet son who must come to terms with not only his father’s illness but also his status as the new kid in school and the abuse of the resident bully.

According to Columbus, working with Franco was a dream come true.

“He never shoots down an idea,” he says. “He’d ponder it, and we’d discuss it, and then he’d always say, ‘Let’s try it out.’ James is an artist and doesn't exclude himself from the idea that he’s also trying to figure it all out. It makes you feel open to giving suggestions. Working with him was a very collaborative process.”

Columbus, who is understandably thrilled to be taking “Guests” to Telluride, is no stranger to the film festival circuit. His personal, eight-minute documentary short, “Battle of the Jazz Guitarist,” spotlights his Indian father, who left behind a burgeoning musical career in the Fiji Islands for a new life in the United States. Part homage and part exposé, it’s a decorated film, shot in front of a green-screen at UCLA TFT, that has been shown at more than 50 film festivals around the world, including the prestigious International Documentary Film Festival Amsterdam. In 2013, “Battle of the Jazz Guitarist” was nominated for a Student Academy Award. It was also on the long list for the Documentary Short Subject Oscar, thanks to a best documentary short win at Michael Moore’s Traverse City Film Festival, which automatically qualified the film for Academy Award consideration.

“Battle of the Jazz Guitarist” on Vimeo.

Columbus attributes his success in no small part to his experience at UCLA TFT.

“My first three films at UCLA TFT weren’t that good. I was [given the freedom] to screw up a number of times before actually making something great,” he says. “If that had happened outside of film school, my film career would have ended very quickly…I have great professors who support me in whatever I do.”

Columbus’ association with UCLA began as an undergrad history major (he graduated in 2010) and it was his love for the subject that led him to pursue a graduate degree in film.

“I learned a lot about human nature through the study of history. I also found there was a lot of power in the writing of history,” he says. “It defines us as a culture. After I began writing my own personal history and biographies of others, I decided that filmmaking was the best way for my writing to reach people.”

“Nancy helped me with the editing process on ‘Guests’ and Gyula helped me celebrate improvisation in my film’s camera work,” he notes. “It’s more true to the kind of stream of consciousness way we think in terms of memory. If it weren’t for Gyula, I would never have had the courage to throw the tripod away, follow the actors with the camera and feel the story with the camera.”

Columbus will take that knowledge with him after Telluride, when he begins a nine-month web series development project as part of Film Independent’s Project Involve.

“It’s another chance to be thrown into a collaborative mix with other people the same way I was in Franco’s class,” he says, “just working in a different medium.”