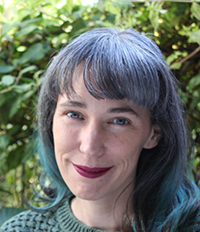 Michelle Liu Carriger specializes in the historiography of theater, performance and everyday life, with special focus on gender, race and sexuality, as well as how clothing and fashion can themselves serve as historiographical methods for maintaining bodily links to the past. Formerly a lecturer at Queen Mary, University of London, her first book project concentrates on clothing and fashion as everyday performance in 19th century Britain and Japan. She attends especially to the ways in which notions of theatricality in clothing and fashion simultaneously articulate and mystify the discourses of gender, sexuality, race, ethnicity and modernity in their work upon bodies. An article excerpted from this work, "The Unnatural History and Petticoat Mystery of Boulton and Park: A Victorian Sex Scandal and the Theatre Defense," won the 2012 TDR (The Drama Review) Graduate Student Essay Contest Award and the 2014 Gerald Kahan Prize from ASTR (the American Society for Theatre Research).

Other recent research includes contemporary subcultural fashions with historical aesthetics such as goth, Japanese street fashion "Gothic Lolita" and steampunk; and her article "No 'Thing to Wear'"on contemporary issues of cultural appropriation and Japanese kimono won the 2019 ATHE (Association for Theatre in Higher Education) Outstanding Article Award and the 2019 Gerald Kahan Prize. To date, she is the only person to have been awarded the Kahan Prize twice.

As a long-time practitioner of the Japanese Way of Tea ("tea ceremony"), including a yearlong Midorikai fellowship at the Urasenke Gakuen Professional College of Chado, Carriger is also at work on a book about Tea as a contemporary practice of historical embodiment and cultural performance. Performance work includes dramaturgy and directing at Brown University and the University of Colorado, Boulder, as well as devised performance and short film with collaborators Molly Flynn and Elise Morrison under the moniker Cabaret Murderess.