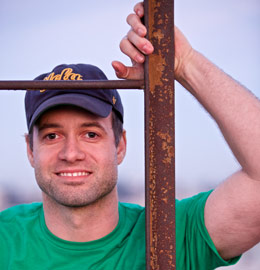 If you’ve been to a movie theater recently, chances are you’ve seen UCLA TFT grad student Merlin Camozzi on the big screen, talking about his participation in the 2014 Sprite Films program and offering a glimpse of his short film, “What We Need,” which was named the Green Ribbon Panel Award Winner in this year’s competition. The pre-feature spot is running in select theaters nationwide through the end of August and encourages audiences to catch his 60-second short at Sprite.com/films through the end of the year. “What We Need,” which will be shown at some of the Sprite brand’s upcoming high-profile events, has already been seen this summer at events surrounding the BET Experience weekend in Los Angeles. As part of Camozzi’s award, a 30-second version of “What We Need,” which he’s currently working on, will be featured on national television this fall as part of the Sprite brand’s media rotation.

It’s heady stuff for the filmmaker who wrote and directed the piece, produced by fellow UCLA TFT student Richard Perry. “What We Need” was chosen from six total finalist films by a panel of film industry and corporate professionals, including actor Michael B. Jordan.

“Being a Sprite Films finalist has been an amazing experience,” said Camozzi. “From receiving production support from the brand, to meeting with our Sprite Films mentor, Michael B. Jordan, to getting to premiere our films at CinemaCon in Las Vegas, Sprite Films has provided an incredible platform to not only advance our craft, but also share our work on a national level. Being selected as the top film this year by the Green Ribbon Panel is a real honor.”

Student filmmakers from 23 participating colleges and universities across the United States submitted scripts to the 2014 Sprite Films competition. The shorts were inspired by an aspect of urban culture and delivered a unique story from their individual point of views.

Watch “What We Need” on the Sprite Films website.

Watch the .30 national commercial on Vimeo.