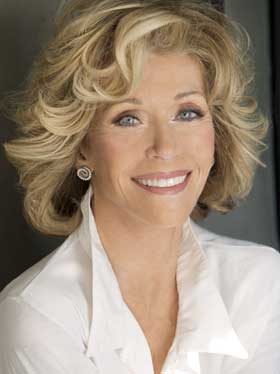 Teri Schwartz, dean of UCLA School of Theater, Film and Television, announced today that Academy Award-winning actress, author and fitness icon Jane Fonda has been named the 2014 commencement speaker at the UCLA School of Theater, Film and Television’s graduation ceremony. Dean Schwartz will preside over the event to be held on Friday, June 13 from 2:00 p.m. to 4:00 p.m. at UCLA’s Royce Hall.

A two-time Academy Award winner, and seven-time nominee, Jane Fonda has starred in more than 40 films, with a great string of classics, since her initial screen debut. Her career has spanned many genres from comedies (“Cat Ballou,” “Nine to Five”) to powerful dramatic performances (“Julia,” “The Morning After,” “On Golden Pond”). Ms. Fonda was one of the first women in Hollywood to form her own production company, producing award-winning films such as “The China Syndrome,” “Nine to Five,” “On Golden Pond,” “Rollover” and “The Dollmaker.” “Coming Home” was the first film she produced under her banner IPC Productions – a film that went on to garner Oscar wins and nominations for Ms. Fonda, its cast, director and writer.

Even after a self-imposed 15-year retirement, Ms. Fonda has come back stronger than ever, earning a Primetime Emmy nomination for her recurring role in HBO’s “The Newsroom” and appearing as Nancy Reagan in “Lee Daniels’ The Butler.” Later this year, she will star opposite Tina Fey and Justin Bateman in Shawn Levy’s “This Is Where I Leave You.” Next month, Ms. Fonda will receive America’s highest honor for a career in film, the AFI Life Achievement Award. Only eight women have received the prestigious award in its 42-year history. In addition to film and television, Ms. Fonda has prevailed on Broadway, starring in Moises Kaufman’s “33 Variations,” in which she received a Tony Award nomination for her role.

Ms. Fonda wrote her autobiography, “My Life So Far,” which was No. 1 on The New York Times bestsellers list, and she published her second book, “Prime Time,” in 2011. She is committed to sharing the benefits of a healthy lifestyle (with two dozen workout videos selling more than 17 million copies, six books and 13 audios).

Fonda has been repeatedly recognized for her tireless work on behalf of women and girls. In 1994, Ms. Fonda was named Goodwill Ambassador for the United Nations Population Fund; in 1995 she founded The Georgia Campaign for Adolescent Potential & Power; in 2004 she co-founded the Women’s Media Center.

“We are truly honored to have Jane Fonda speak at this year’s commencement ceremony,” said Schwartz. “Jane is a visionary and a remarkable artist who has spent her life telling deeply powerful stories that have moved and inspired audiences worldwide to action for the greater good and to a greater understanding of our common humanity through her films, philanthropic efforts and personal journeys. She has effortlessly placed herself at the heart of what TFT stands for — the education and development of outstanding new artists and scholars whose stories, performances and research enlighten, engage and inspire change for a better world.”

Emmy-winning producer Darren Star, known for such projects as “Beverly Hills, 90210,” “Melrose Place” and “Sex and the City,” has been named the Distinguished Alumnus in Film, Television and Digital Media, and Wendy C. Goldberg, artistic director of the National Playwrights Conference at the Eugene O’Neill Theater Center in Waterford, Conn., is the recipient of the Distinguished Alumna Award in Theater.

In commenting on this year’s Distinguished Alumni, Schwartz said, “We are thrilled to celebrate the extraordinary achievements of alumni Darren Star and Wendy Goldberg. Their works are diverse and hugely innovative, reflecting a passion for telling stories that are thought provoking and entertaining; their achievements are a great testament to their extraordinary talent and to the world-class education they received at UCLA.”

Primetime Emmy Award-winner Darren Star, a 1983 UCLA graduate, is the creator and executive producer of three of television’s zeitgeist-defining series: “Sex and the City,” “Beverly Hills, 90210” and “Melrose Place.” Each show broke new ground by centering on teens, twenty-somethings and thirty-somethings, paving the way for a new era of television. “Beverly Hills, 90210” became one of the longest-running series in TV history and “Sex and the City” was the first cable series to win a Best Series Primetime Emmy Award, in addition to winning three consecutive Golden Globe Awards for Best Comedy Series.

Wendy C. Goldberg received her MFA in directing from the UCLA School of Theater, Film and Television in 1998. She currently is in her 10th season as artistic director of the historic National Playwrights Conference at the Eugene O’Neill Theater Center in Waterford, Conn. Under Goldberg’s tenure, the O’Neill was the recipient of the 2010 Regional Theatre Tony Award. She has overseen the development of more than 75 projects for the stage, and is an award-winning director whose credits include many world premieres, revivals and musicals at some of the most esteemed theaters in New York and across the country.