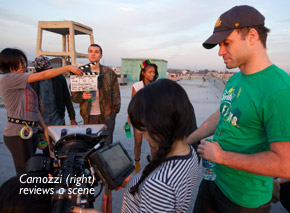 Earlier this year, almost on a whim, second-year UCLA School of Theater, Film and Television (UCLA TFT) directing grad student Merlin Camozzi decided to enter his original script in the 2014 Sprite Films competition — not that he wasn’t busy enough. Camozzi was in the throes of working on his advanced film, “a post-apocalyptic family drama with a zombie twist,” he says, and continuing to work, on a part-time basis, as a licensed attorney, a job he previously held full-time. But something drew Camozzi to the project, which sought stories from young filmmakers that reflected the Sprite brand and showed protagonists “making their mark on urban culture through artistic means,” he says.

It’s a good thing Camozzi decided to enter, as he’s one of six finalists (from a pool of 135 entries from 23 U.S. universities) chosen to create a short film based on his script, “What We Need.” The short film, written and directed by Camozzi and produced and production designed by fellow UCLA TFT grad student Rick Perry, was inspired by Camozzi’s love of music. The 50-second spot follows three young, urban singer-songwriters as they create music that skyrockets them to fame. At the end of the spot, they celebrate with — what else? A Sprite.

A Green Ribbon Panel of entertainment industry professionals led this year by actor Michael B. Jordan (“Fruitvale Station”) will critique the technical aspects of the films and select one as a first-place award recipient on Fri., May 16. The winner will have their short film debut in August 2014 in select theaters across the country. What’s more, if fans who vote for “What We Need” on Sprite.com/films have their way (voting closes on Thurs., May 15), the film could win the Fan Favorite Award: A $5,000 donation given to UCLA TFT and a VIP trip for Camozzi, Perry, and two other team members to attend the American Film Institute’s AFI Fest in November 2014. (Last year, UCLA TFT filmmakers Manhea Kim, Meja Shoba and Wesley Ambrecht were Sprite Films finalists for their spot "No Doubt About It." In 2012, Bruins Simon Savelyev and Steven Huffaker and their film “Prom Night” received the Green Ribbon Panel award.) In making his short film, Camozzi says he wanted to present a story “about people who are working hard and trying to get where they want to be on their own terms — which is what I’m trying to do as a filmmaker.”

Doing things on his own terms isn’t anything new for Camozzi, who has been carving his own way since he told his parents that he wanted to go to a prestigious private school instead of being home schooled, and earned a scholarship to make that desire a reality.

It was around that time that Camozzi first gave some serious thought to going to film school after graduation. He’d been a film buff since he was a kid, loved to write, and for a while it just made sense. But uncertainty about the career prospects of a would-be director led him, instead, to graduate from the University of Oregon with a degree in history. He then pursued a law degree from Northwestern University.

The entertainment industry was never very far from his mind, however. In law school, Camozzi focused on transactional law, intellectual property and negotiations. After passing the bar in 2006, he worked at law firm Latham & Watkins, LLP, and then, in reality TV, working on the legal side of reality shows such as TLC’s “Toddlers in Tiaras” and Bravo’s “Flipping Out,” among others. He also taught law at Pepperdine University on the side. But the allure of Hollywood’s legal side was short-lived.

“By the time I had done that for a while I was ready for a change of pace,” he says.

So he dabbled as a producer on another reality TV show, Lifetime’s “My Ghost Story,” before coming full circle and enrolling in UCLA TFT’s MFA filmmaking program in Fall 2012.

“I’ve learned a tremendous amount here,” he says. “My filmmaking abilities have increased 10,000 percent since I started. Mark Rosman, Becky Smith and Patricia Cardozo have taught me so much; Rory Kelly, my directing professor this year, is an amazing teacher as far as some of the conceptual aspects of film production go.”

When asked what type of stories he wants to tell, Camozzi says, “The ones that most attract me are stories about people who are on the fringes, people on the edges of society, people who are struggling and surviving,” citing director Debra Granik’s “Winter’s Bone” (2010) as an example. Even so, he doesn’t want to pigeonhole himself. “I’d love to take a stab at an animated movie,” he adds. “I love genre movies, too, and I really appreciate how Christopher Nolan was able to bring grittiness into a big studio genre piece like ‘The Dark Knight Rises.’”

Reflecting on the Sprite Films competition, Camozzi hopes “What We Need” follows the success of Savelyev and Huffaker’s “Prom Night.” Regardless of the outcome, however, he says, “It was fun to play within that sphere of needing to deliver something that was on message but at the same time making it true to my style and authentic for me.”