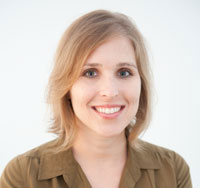 A lifelong cinephile who counts “Mulholland Drive” (2001) and the director’s cut of “Blade Runner” (1982) among her favorite movies, Critical Media Studies alumna Maria San Filippo (PhD, ’07) has channeled her love of film and passion for gender studies into her first book, “The B Word: Bisexuality in Contemporary Film and Television” (Indiana University Press, 2013). She’s clearly a pro on the subject: Slant magazine named “The B Word” one of the 10 Best Film Studies Books of 2013. San Filippo began her professional academic career as a visiting lecturer at TFT and UCLA’s LGBT Studies Program, and a postdoctoral scholar in the Cinema and Media Studies Program at her alma mater Wellesley College (where she got her undergrad degree in film and political science). She was also a lecturer on Studies of Women, Gender, and Sexuality at Harvard University, and now is a visiting assistant professor in gender studies at Indiana University in Bloomington, Indiana. San Filippo took a moment away from her current book project, “After the Death of Cinema: Queer Spaces and Sexualities in 21st Century Screen Media,” to chat about “The B Word” with TFT’s Noela Hueso.

Congratulations on the success of your book.
Maria San Filippo: Thank you! It’s a nice little surprise in the New Year.

What was the genesis of “The B Word”?
San Filippo: It came from the dissertation I wrote as part of my graduate work at UCLA. 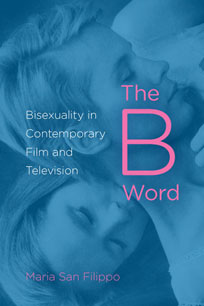 It changed a good deal, though. It had originally been a study of bisexuality in film from the 1960s to the present. When I turned it into a book I included television as well. It expanded the story quite a bit and brought it up to the present. It seems to be the definitive study currently out there about bisexuality in screen media.

There was nothing out there like it?
San Filippo: No. In fact, that was my impetus for wanting to write the book. When I began my dissertation, I was looking at the female vampire figure in countless films. Most were low-budget exploitation films from the ’60 and ’70s, not seen by many people and not given any awards. But for me, as a young queer media fan, I thought they were really fascinating and so representative of cultural associations around bisexuality — specifically female bisexuality. I went looking into literature to write an analytical paper on these films and found that the vampire figure was always theorized as being lesbian, never as bisexual. I thought there was something very specifically bisexual in her embodiment that needed to be examined without cancelling out the potential for lesbian connotations. Then I started looking into other representations of bisexuality and I found the exact same thing to be the case: There just hadn't been any serious academic writing on the subject, whether male or female. It was a big, important gap that I wanted to fill. I did hear about another project, just as my book was going to press, focusing on male bisexuality (“Male Bisexuality in Current Cinema: Images of Growth, Rebellion and Survival,”) by Justin Vicari; McFarland, 2011). I hope there’s more such work coming down the pipeline, especially given the rich examples of bisexuality currently in the media both in film and in television.

How were your chapters divided?
San Filippo: I spent one chapter looking at art cinema from the 1960s to the present. In art cinema, you have more of an opportunity to represent bisexuality than you do in mainstream Hollywood fare. Ingmar Bergman’s “Persona” (1966), David Lynch’s “Mulholland Drive,” the Robert Altman film “3 Women” (1977) and the Jane Campion film “Holy Smoke” (1999) were some of my most important case studies. Then I turned to look at those exploitation films that had given me that first itch for this project. They were crude but included some important considerations — what I call the same-sex institution films: Films that are set in all-women's institutions, whether it be boarding schools, prisons or, in the case of a film like “Girl, Interrupted” (1999), a mental facility, still looking at the very different logic of desire that women can explore once in a single-sex environment. Then I had a chapter on male bisexuality. I looked primarily at the mainstream contemporary Hollywood bromance. I did see signs of bisexuality present — however implicit or disguised — in some popular, moneymaking films such as “Wedding Crashers” (2005), “The 40-Year-Old Virgin” (2005), “Superbad” (2007), “I Love You, Man” (2009) and, for an interesting women-directed twist, “Humpday” (2009). I countered my reading of those bromances with a reading and an analysis of “Brokeback Mountain” (2005) and looked at that against the backdrop of marriage equality. There was a lot of legislation and discourse going on at the time I was writing that chapter and it turned out to be exciting in terms of urgency and topicality. It has been the chapter that has gotten the most attention. The TV chapter, which concluded the book, was the most frustrating because I had to finish writing it at a time when there were suddenly a number of bisexual representations on television coming on the scene. I got to bite into it but not really enjoy the extent of what I might have been able to examine.

What were some of the TV shows you were able to touch upon?
San Filippo: The chapter focused on two series, “A Shot at Love with Tila Tequila” and “Rescue Me.” I also discussed in some detail “Desperate Housewives,” “The Good Wife,” “Grey's Anatomy,” “True Blood,” and, of course, “The L Word.” The series I’m very excited about now is the Netflix series “Orange Is the New Black,” which takes place in yet another single-sex institution and constitutes one chapter of my forthcoming book project. The protagonist is married to a man but had a past serious relationship with a woman, to whom she returns when she finds herself in back close proximity with her in prison. There are a lot of the same connotations of bisexuality in the show that I’ve seen before: Its association with criminality, with a kind of capricious personality, that it’s a temporary phase, adultery…those kinds of associations that point to a lot of anxieties people have about bisexuality that still need addressing.

Is bisexuality a choice? Innate? Is it both?
San Filippo: I think it’s both. There has been a real imperative to view it as innate for political gains, which is understandable: It translates better as a political issue to talk about it as something a person is born with, but I think — and this is the crux of my argument in the book — that sexuality is far too fluid to be contained in a one category, that even bisexuality is too limiting a concept to encompass the complexities of how we desire and how we find sexual fulfillment.

What propelled you to pursue media and gender studies as a career?
San Filippo: It is at the intersection of media studies and gender studies that I find myself most fascinated. As soon as I knew it was a possibility to study film for a living, I knew that that was what I wanted to do. I find film to be an incredibly mesmerizing medium that is the most compelling way of voicing one’s creative expression and view of the world. The kinds of questions and issues I encountered at Wellesley about identity and the cultural norms that confine us to thinking about gender and sexuality in pretty limited ways followed me throughout school and continued to inform my thinking about film and now television as well.

Why did you choose to get your PhD at UCLA?
San Filippo: I got my master’s degree at NYU and it was a great experience but I was looking for a place that would provide me with a community of fellow cohorts as well as an affordable community to live in, which New York wasn’t! I looked at UCLA because it was a reputed program and because the faculty was very welcoming in terms of being in touch with me, expressing interest in my work and connecting me with potential people to work with such as Professor Janet Bergstrom, who ended up being my dissertation director. I knew her work and was excited to come study with her. I wanted to be in a dynamic, cinematic environment, too, and while New York is also that, as anyone in my graduate program would tell you, it was wonderful being in a city where not only could we see just about every film that gets a U.S. theatrical distribution, but we had easy access to the Academy of Motion Picture Arts and Sciences’ Academy Film Archive. That was a real boon for those of us who were doing any kind of historical work.

What are some of the things that you found most valuable about your UCLA education?
San Filippo: Though I didn't want to do production work as a grad student, being in a classroom comprised of both CMS students and production students was extremely valuable. Denise Mann, who is the head of the Producers Program, is also a CMS professor. I took a couple of her classes and the conversations that took place across the aisle, so to speak, between students like me, studying film and TV from a critical/academic perspective and students who intended to make a living in the entertainment industry and had a very different perspective, were mutually beneficial.