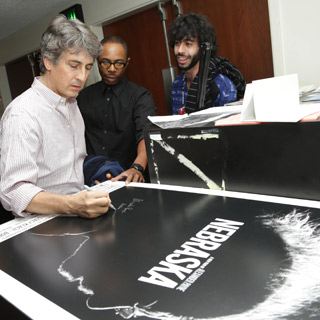 When the Academy Award nominations were announced on Thursday, Jan. 16, it came as no surprise that TFT alum Alexander Payne, (MFA ’90), his black-and-white film “Nebraska” — which he has called “a comedy with moments of gravity” — and its stars Bruce Dern and June Squibb were all nominated for Oscars (“Nebraska” has also received nominations in the best original screenplay and cinematography categories). After all, the film has been receiving acclaim from critics’ associations, entertainment industry guilds and awards ceremonies since it won the Palme d’Or and Dern won the best actor award at the Cannes Film Festival in May.

With Thursday’s announcement, Payne now has two directing nominations under his belt (he was previously nominated for 2004’s “Sideways”), one adapted screenplay nom (1999’s “Election”), a best picture nom (2011’s “The Descendants”) and two wins in the adapted screenplay category (“The Descendants” and “Sideways”) for a total of six nods from the Academy of Motion Pictures Arts and Sciences.

For those who like keeping score, some interesting factoids have emerged since the nomination announcement, according to The Hollywood Reporter:

It’s been 10 years since producers Albert Berger and Ron Yerxa approached Payne with the Bob Nelson-penned script for “Nebraska,” asking the filmmaker if he knew of a director who might be interested in helming the story of a old man who goes on a road trip to claim what he believes is a million dollar sweepstakes prize.

The producers approached Payne, who was in pre-production on another road-trip film, “Sideways,” not only because they had worked together before (on “Election”) but because they knew Payne was a Nebraska native and had a history of shooting his films there (“Citizen Ruth,” “Election,” “About Schmidt”). It was entirely possible, they thought, that Payne knew a director who would be perfect for the job. As it turned out, he did: Payne himself.

While Payne was interested, he didn’t want to do another road movie immediately following “Sideways” and asked the producers to wait for him while he worked on his next project, “The Descendants.”

As the “Nebraska” team must surely agree, it was worth the wait.