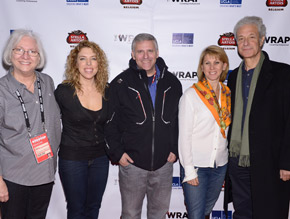 Also circulating at the reception, with refreshments sponsored by Stella Artois, were producer Justin Begnaud (MFA, ’10), executive producer Nick Moceri (’10), and editor Alex O’Flinn (MFA, ’09), the team behind “A Girl Walks Home Alone at Night,” which premiered at this year’s Sundance during the fest’s NEXT programming section.

On Monday, Jan. 20, Dean Schwartz and Sharon Waxman co-hosted an industry experts panel at Main Street’s Root’d boutique entitled "Clutterbusters: How to Make Your Indie Movie Pop in the Digital Age." A capacity crowd filled the space, which had been transformed into the YouTube lounge at Sundance.

The conversation started by the acknowledgement that in this digital age, it’s easier than ever to make a film. On the downside, fewer buyers are picking them up.

“Distributors in today’s market are struggling to figure out how to reach (audiences) without spending too much money,” Cohen said, suggesting that filmmakers need to find a way to brand their movies to help “break out of the clutter.”

“The ones that stand out are the ones that are really unique, whether they are commercial or really performance driven,” Rhodes said.

Cohen agreed to a point. He suggested that “Quality sells — but garbage sells if it has a hook.”

While Hofstatter suggested that even before a film is made, “you have to know your audience is,” Von Couvering said that ultimately, the only thing a filmmaker can trust is his or her own judgment.

There needs to be a balance “between the passionate filmmaker and the understanding that there’s a marketplace for distribution,” Callow added. Ultimately, filmmaking is a commercial enterprise.

Two decades after the film made its world premiere at the 1994 festival, the UCLA Film & Television Archive’s newly restored version of “Hoop Dreams” screened in the From the Collection program on Monday, Jan. 20. The recently completed restoration represents the collaborative effort of the Archive, Sundance Institute, the Academy Film Archive branch of AMPAS and Kartemquin Films. The filmmakers participated in an extended Q&A immediately following the screening.