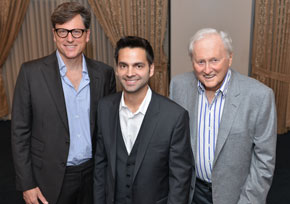 It was a good night for UCLA TFT grad student Rocco Pucillo, who walked away with a $15,000 prize on Nov. 4, when he was named the first-prize winner of the 58th Annual Samuel Goldwyn Writing Awards. His script, “Inspector Sun and the Curse of the Black Widow,” was chosen from a pool of five finalists.

Please visit the Goldwyn Awards website to apply or for more information.