LOS ANGELES (September 18, 2013) — Teri Schwartz, Dean of the UCLA School of Theater, Film and Television, one of the world’s most prominent academic institutions for entertainment and performing arts education, announced today the appointment of three new professors, two in the Department of Theater and one in the Department of Film, Television and Digital Media. Additionally, she announced the creation of a new position, Assistant Dean, Technology and Innovation.

J. Ed Araiza has been named the Department of Theater’s Head of M.F.A. Acting Program. Professor Araiza has extensive experience working on multicultural and cross disciplinary projects as a writer, director, dramaturg and performer. For the past 20 years he has been a member of New York City’s internationally acclaimed SITI Company, one of the most important experimental theater ensembles in the world. He has performed at the Kennedy Center in Washington, D.C.; the Olympic Arts Festival in Atlanta; the Brooklyn Academy of Music; the Actors Theater of Louisville; Los Angeles Theater Center; Minneapolis’ Walker Arts Center, Harvard University’s American Repertory Theater; and the Getty Villa in Malibu. Prestigious international festivals include Japan’s Toga Festival; the Edinburgh Festival in Scotland; the Biennale-Bonn Festival in Germany; the Dublin Theater Festival in Ireland and the MC93 Bobigny Festival in France.

With seven original full-length plays produced, Professor Araiza is a member of The Dramatist Guild, Austin Script Works and NoPE (No Passport Required). He was artist in residence/guest faculty for three semesters over three years at St. Edward’s University in Austin Texas; artist in residence/Coastal Studies Chair at Bowdoin College in Maine; guest lecturer in acting and performance at Ontario’s Windsor University; and adjunct faculty at the Julliard School. In Fall 2011, he served as a guest director in the School of TFT’s Department of Theater working with second and third year M.F.A. students on a production of The Adding Machine by Elmer Rice. Other international workshops he has led include those at the Singapore International Theatre Festival; South Korea’s Seoul Factory Theatre; the Norwegian Theatre Academy; the Icelandic Academy of the Arts; Festival Iberoamericano in Bogota, Columbia; and, most recently, a month-long residency at TEAK the Finnish Theatre Academy. A native of San Antonio, Professor Araiza is a graduate of Texas A&I University. 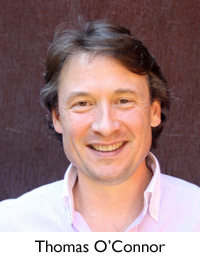 Thomas O’ Connor has been appointed Associate Professor in the M.F.A. Acting Program. Though trained primarily as an actor, Professor O’Connor performed for two important dance choreographers in his early career: Ohio State University professor John Giffin, who was a member of the Dance Theater of Wuppertal in Germany under the direction of Pina Bausch; and with avant-garde choreographer and dancer Maureen Fleming. In 2002, Professor O’Connor began training in Japan with the prominent Noh actor Ryoichi Kano and for the past seven years has been a performer in Theatre Nohgaku, which is dedicated to developing audience “understanding of Noh as one of the world’s oldest theater forms.” Since 2008, he has served on the steering committee and in 2010 he became the managing director of the company. The company has gained increasing international recognition in the last five years with performances in Paris, London, Oxford, Dublin, Tokyo, Kyoto, Beijing, and Hong Kong. Founded in 2002, by Artistic Director Richard Emmert, Theatre Nohgaku is dedicated to developing an English voice for Noh, one of the world¹s oldest theater forms. In particular, the company seeks "a dialogue between two different Noh theatres: one traditional Japanese, the other contemporary and international."

Professor O’Connor has held a number of positions at colleges and universities including West Virginia University where he was recognized twice with an Outstanding Teaching Award. He has had adjunct and visiting appointments at Williams College, Doshisha University in Kyoto, Doshisha Women’s College of Liberal Arts, and has been a Research Fellow in Intercultural and Interdisciplinary Learning for the Japan Ministry of Education and the National Institute of Multimedia Education. Professor O’Connor received his B.F.A. in Theater Communications from Wayne Sate University; his M.F.A. in Theater Performance and an M.A. in Dance Composition from Ohio State University.

The appointments of Professors Araiza and O’Connor are another step forward in the advancement of UCLA TFT’s exciting new interdisciplinary M.F.A. programs, which were instituted in the 2012-13 academic year. In the Performance Programs, actors, directors and playwrights share a collective curriculum of acting, voice, movement, directing and playwriting in the first year, along with courses in theater business and producing. For the Design Program, M.F.A. students in costume, scenic and lighting design study and work across all areas of performing arts and entertainment. The new M.F.A.s focus on work across theater, film, television, digital media and animation. Jasmine Nadua Trice comes to UCLA TFT as an assistant professor in the Department of Film, Television and Digital Media from the National University of Singapore where she spent several years teaching transnational screen studies and worked on final revisions of a manuscript on the burgeoning independent cinema movement in Manilla, Philippines. The research and resulting book were funded through prestigious grants from the American Association of University Women and the Asian Cultural Council. Her other areas of expertise include new media studies and media history. Professor Trice earned her doctorate from Indiana University and her dissertation received honorable mention from the Society for Cinema and Media Studies during their 2011 Dissertation Award competition.

Jeff Burke, previously the Director of Technology Research Initiatives for UCLA TFT and Executive Director of UCLA TFT’s Center for Research in Engineering, Media and Performance (REMAP), has been appointed to the newly created position of Assistant Dean, Technology and Innovation. Mr. Burke is a three-time UCLA alumnus (B.S., M.S., Electrical Engineering; M.F.A., Film, Television and Digital Media) who has produced, managed, programmed and designed experimental performances, short films, new genre art installations and new facility construction internationally for more than 15 years. Mr. Burke has been a faculty member since 2001 and today, in addition to his role developing technology and innovation strategy at UCLA TFT, he leads applications research as part of the School’s participation in the Named Data Networking project, a 12-campus effort supported by the National Science Foundation (NSF) to develop a future Internet architecture. In 2004, Mr. Burke co-founded REMAP, a collaboration with the Henry Samueli School of Engineering and Applied Science, which combines research, artistic production, and community engagement. Professor Burke’s research has been supported by the NSF and NEA, Intel, Cisco, Google, Trust for Mutual Understanding, and MacArthur Foundation, among others. From 2006-2012, Mr. Burke was area lead for participatory sensing at the National Science Foundation Center for Embedded Networked Sensing, helping to define a new application arena for mobile devices.