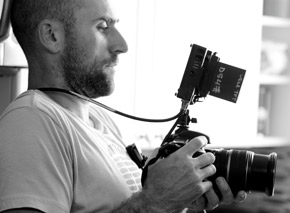 Justin Perkinson, a UCLA School of Theater, Film and Television graduate student and 2014 Fulbright Program fellow (the eighth to come from TFT since 1993), wasn’t supposed to be a filmmaker. All the signs pointed to him going into medicine, like so many family members before him. After all, the affable Richmond, Va., native loved math and science and even spoke proudly at his high school graduation of his intention of becoming a doctor.

But after he arrived at Davidson, a small, private liberal arts college in North Carolina where he did his undergrad work, a required creative writing class changed all that. He discovered that he loved to write and before too long was authoring a rock opera based on Mary Shelley’s “Frankenstein” with a fellow student.

As he abandoned the medical track and became an English major, he took stock of his young life and decided that not only did he want a career in the arts; he wanted to travel and explore. He already loved languages and had the traveling bug — he completed his junior year abroad studying Spanish in Spain and growing up had spent summers, spring breaks and holidays visiting his dad in Jamaica, who moved there when Perkinson was 8.

“It was cool learning patois and being in a place that was so different from Richmond,” says Perkinson, now 34. “That experience spawned my travel cultural interests.”

By the time he was accepted to UCLA TFT’s graduate filmmaking program in 2009, additional voyages for the self-described adventurer had taken him to Argentina (as a cultural ambassador on a Rotary fellowship), Tanzania (making a film about the healthcare crisis in sub-Saharan Africa), and Bolivia. It was in Bolivia where he made a small film that he called his “litmus test,” which cemented his commitment to becoming a full-time filmmaker.

“I chose UCLA TFT amongst several film schools because of its reputation as one of the world's top training grounds for filmmakers, its high-caliber faculty, top-notch students, and proximity to the entertainment industry,” he says. “But I also chose the school for the breadth of its education. I was drawn to the opportunity to take a variety of courses in filmmaking — not just directing, but also writing, cinematography, producing, and the like.”

At the same time, he still had a thirst for international stories and a desire to learn more about other cultures and their languages. So in 2012, Perkinson acted on something he had been laying the groundwork for since he enrolled at UCLA: He applied for a coveted merit-based Fulbright Arts Grant through the Fulbright Program, considered one of the most prestigious awards organizations in the world, operating in 155 countries. Created in 1946 by U.S. Senator J. William Fulbright to promote understanding, peace and a sense of community between U.S. citizens and those in other parts of the world, the highly competitive Fulbright Program currently provides 8,000 grants a year to individuals studying the arts, humanities, social sciences, mathematics, natural and physical sciences and professional and applied sciences.

When the time came to apply for the Fulbright Arts Grant, Perkinson was prepared, having done a lot of self-reflection about his goals.

“I thought long and hard about a project I would have a personal interest in, one that I would want to devote my life to for the next year — but also one that would be something within the value system of the Fulbright,” he says.

His destination, China, and the project he chose, were the perfect amalgamation of his many interests: A 30-minute documentary about traditional Chinese medicine, the oldest existing medical system on Earth, and how it works alongside Western medicine in the country.

“A hospital in China will have both a traditional medicine wing and a western medicine wing,” Perkinson says. “I’m really curious about how this ecosystem co-exists especially now because China is exploding economically and industrially.”

Perkinson credits “the breadth of training” he received at UCLA TFT with preparing him for his Fulbright adventure.

“UCLA conjures a spirit of collaboration, which starts on Day One with the boot-camp training of first-year graduate students and the creation of seven-person filmmaking teams with rotating roles on seven different film sets,” he says. “These teamwork/collaboration-building skills are hugely important in the tough world of filmmaking — and I will most definitely need to draw on them while in China, in a foreign land, navigating a foreign culture, speaking a foreign tongue.” (In order to meet the Fulbright’s expectation that a potential scholar speak the vernacular of his host country, Perkinson began adding to his language repertoire, taking Chinese language classes at UCLA two years before applying for the grant.)

In all, the application process and waiting time to find out whether or not he would be chosen as a Fulbright scholar took more than a year.

“I couldn’t have gotten this far in the project without the help of my UCLA Thesis Committee,” Perkinson says. “I have been very fortunate to have the expertise of my three faculty advisers, who are professional filmmakers in their own right. Professors Becky Smith, Gyula Gazdag, and Nancy Richardson have been tremendously supportive of my Fulbright documentary, and I will definitely look for their guidance this coming year as I produce my film in China, and then back at UCLA as I'm wrapping it up.”

There are about 40 Fulbright scholars in China but Perkinson is humbled and excited to be only the fourth person in the history of the Fulbright U.S. Student Program to be accepted as a filmmaker headed to the country.

Though his Fulbright fellowship begins in January 2014, he arrived in China in mid-August for five months of intense Chinese language immersion in Beijing, the first phase of what he already considers to be “the most interesting adventure I’ve had so far.”