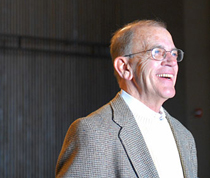 The UCLA community is mourning the loss of beloved Theater Professor Gary Gardner who passed away peacefully of natural causes in his home on Saturday, June 15, 2013. A devoted Midwesterner, Gary was born on March 24, 1944, graduated from Danville High School in Danville, Ill., and earned a B.A. from the University of Illinois in 1966. Shortly thereafter, he came to Los Angeles and attended the College of Fine Arts at UCLA where he earned an MFA in Playwriting in 1968. In the same year, he was awarded the Samuel Goldwyn Writing Award for his play, “August and Ice Cream.” The play was produced in Los Angeles, garnering two Drama-Logue Awards for Best Actor and Best Ensemble Cast. In 1972, Gary was awarded a Ph.D from the University of Illinois, but quickly returned to UCLA in 1973 as a young Assistant Professor in the Theater Department. He never left UCLA again and would joyfully tell people that he began his teaching career at the tender age of 28. An extraordinary man of the theater, Gary excelled as a playwright, an actor, a director of both musicals and straight plays, a lyricist for Broadway and cabaret, and as a teacher, scholar and theater historian.

His 40-year teaching career at UCLA spanned five decades. He was a phenomenal teacher in two areas: The History of the American Musical both as a stage director and historian and as a teacher of playwriting, where he influenced hundreds of budding playwrights. Gary’s students included Shane Black, Nancy Cartwright, Susan Egan, Diane Frolov, Mariska Hargitay, Tom Shumacher, Ed Solomon, Michael Stuhlbarg and Tim Robbins.

At UCLA, Gary directed wildly successful, sold-out musical productions of “She Loves Me,” “Carousel,” “Company,” “A Chorus Line,” “Urinetown,” “Anything Goes” and “Is There Life After High School?” He also directed very successful runs of “My Fair Lady” and “Peter Pan” at the Thousand Oaks Civic Light Opera and wrote original lyrics for “Hollywood Live!” which played at the Flamingo Hotel in Las Vegas.

Other popular UCLA productions include “Middle of the Night” (starring Joyce DeWitt), John Guare’s “The House of Blue Leaves,” Arthur Miller’s “The American Clock” and, his last production at UCLA, Eugene O’Neill’s “Desire Under the Elms.” A passionate supporter of original student work, Gary directed “Upstream Toward Lethe” by George Moran, “Family Matters” by Jeff Brown, “The Atomic View Motel” by Scott Sieffert, and “A Small Pair of Feet in the Middle of the Sea” by Kit Steinkellner. Devoted to students long after they graduated, Gary directed a production of “Trog and Clay” by former MFA student Michael Vukadinovich at the Powerhouse Theater in Santa Monica.

Gary was especially proud of directing the student written musical review “Bruinhaha,” which played the Kennedy Center and won the ASCAP Award in 1985, after a tour of UC campuses. Other Gary student productions won the American College Theater Festival awards in 1977, 1981, 1984, 1989 and 2009. He was also enormously proud of having been selected as Number One UCLA Instructor every year between 2001 and 2007, primarily because of his astoundingly popular class, History of the American Musical Theater, which he created in 1997. (Yes! Gary did sing Broadway songs as part of his wonderfully fact-filled lectures on America’s best and most popular musicals. He did a resounding Ethel Merman, which will be remembered by his lucky students for decades to come.) Gary’s presence at UCLA and the extraordinary popularity of his course convinced the estate of musical theater giant Ray Bolger (Scarecrow in 1939’s “The Wizard of Oz”) to launch The Ray Bolger Musical Theater Program, which trains students in acting, singing and dance, which Gary chaired since its inception.

As a playwright, Gary wrote the book and lyrics for the off-Broadway musical “The Matinee Kids” with composer Brian Lasser, with whom he wrote cabaret and nightclub material for performers Carol Lawrence, Karen Mason and Donna Murphy. Gary also teamed with composer John Kroner to write the children’s musicals “Rabbit Sense” and “Everything About a Day (Almost)” for off-Broadway professional children’s theater TADA! Each has been revived numerous times since their off-Broadway debuts. New Yorkers knew Gary for the yearly galas he wrote with Kroner for the 92nd Street Y for stars Judy Kaye and Sutton and Hunter Foster, as well as numerous cabaret performances of his songs at Carnegie Hall, the Russian Tea Room, and The Algonquin. Gary also contributed special material and comic lyrics for “What The World Needs Now…A Tribute to Burt Bacharach,” a Spring Gala for the 92nd Street Y in May 2009.

As an actor, Gary performed at several Equity waiver theaters throughout Los Angeles including Buffalo Nights Theater, founded by UCLA graduates; The Actors Gang, founded by Tim Robbins; the CAST Theatre; and the 21st Street Theatre. He performed in “West Side Story” for the UCLA Music Department. He also gave freely of his enormous talent and performed in 17 award-winning student films, some of which have played on Showtime and PBS. In Illinois, he performed the role of Professor Higgins in “My Fair Lady” at the Danville Light Opera.

Gary was a member of ASCAP, The American Society of Composers and Publishers since 1990, a Director in Residence at the Lehman Engel Musical Theater Workshop since 1992, and a member of ALAP, The Alliance of Los Angeles Playwrights, since 2005.

Funeral arrangements are being planned by his loving family in Danville, Ill., where he will be laid to rest.

The Theater Department at UCLA’s School of Theater, Film and Television will host a music, song and dance filled “Celebration of Gary Gardner’s Life as Friend, Artist and Teacher” in Fall 2013. Specific dates for the celebration will be posted on a Facebook page created in Gary’s memory: https:/www.facebook.com/RememberingGaryGardner and on the TFT website.

Friends and fellow artists, colleagues, former students and fellow theater aficionados are encouraged to go to Gary’s Facebook page and share their experiences and memories. It will be one way for all of us to keep Gary in our hearts and to keep our hearts light without him.

Gary would say this better and in robust Ethel Merman style:

“There’s no business like show business, Like no business I know… Everything about it is appealing… So let’s go on with the show!”

In honor of Gary Gardner’s memory, the Department of Theater has created two funds to support the work at the UCLA School of Theater, Film and Television to which he dedicated his life.

The Gary Gardner Playwriting Scholarship/Fellowship - To support students in the study of Playwriting within the Theater Department at the UCLA School of Theater, Film and Television

The Gary Gardner Musical Theater Scholarship - To support students enrolled in the Musical Theater Program within the Theater Department at the UCLA School of Theater, Film and Television