Co-Founder of The Doors Ray Manzarek has passed away 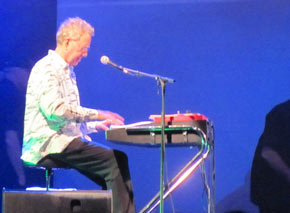 We’re saddened by the news that Ray Manzarek, UCLA Department of Cinematography alum and co-founder of The Doors, passed away Monday, May 20 at the age of 74.Manzarek, a student at UCLA from 1962-65, met Jim Morrison here and the two formed the iconic rock group in 1965.

"I was deeply saddened to hear about the passing of my friend and bandmate Ray Manzarek today," Doors guitarist Robby Krieger said in a statement. "I'm just glad to have been able to have played Doors songs with him for the last decade. Ray was a huge part of my life and I will always miss him."

Manzarek also authored a few books in his later years including his 1998 memoir "Light My Fire: My Life With the Doors," a civl war ghost novel entitled "Snake Moon," and Freshly Dug, a poetry collaboration with musician Darryl Read.

Manzarek felt strongly that the remaining members of the group should get back together and tour and attempted to reconcile the group on numerous occasions. He was quoted as saying "We're all getting older. We should, the three of us, be playing these songs because, hey, the end is always near. Morrison was a poet, and above all, a poet wants his words heard."