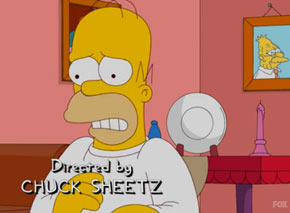 TFT professor Chuck Sheetz ’83, the School’s vice chair, undergraduate studies, will direct the Sunday, May 19 season finale of Fox’s “The Simpsons,” entitled “The Saga of Carl/Dangers on a Train.”

In the episode, Homer, Moe, Lenny and Carl win $200,000 in the Springfield Lottery. But when Carl takes off to Iceland — his homeland — with all the winnings, the guys embark on a Nordic adventure to get the cash back. Then, Marge mistakes a swinging Ashley Madison type for a Dolly Madison-type cupcake site, not realizing it’s a destination for married people seeking liaisons. On the site, she meets the charming Ben (guest voice Seth MacFarlane).

“Train” is the 17th “Simpsons” episode that Sheetz, an Emmy Award-winning animation director, has helmed. He most recently directed “Gorgeous Grandpa,” which aired on Sunday, March 3. Other “Simpsons” credits include such classic episodes as “I am Furious Yellow,” “Any Given Sundance,” “Simpsoncalifragilisticexpiala(Annoyed Grunt)cious,” “Springfield Up,” and “Eternal Moonshine of the Simpson Mind” (for which he won the Emmy in 2008). He produced and directed many episodes of the TV series “Recess” and directed the feature film “Recess: School’s Out” (2001).