Q & A with the voice of Bart Simpson 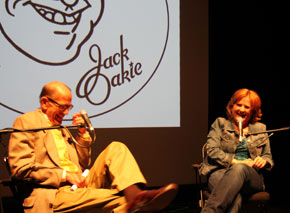 The evening included a brief introduction of the Jack Oakie Foundation initiatives followed by a Q&A with Cartwright, which was moderated by Gary Gardner, Chair of UCLA’s Ray Bolger Musical Theater Program.

The Jack Oakie and Victoria Horne Oakie Charitable Foundation’s mission is to follow through with the late Jack Oakie’s wish, “Give the money to the kid,” by underwriting lectures on comedy and providing scholarships for deserving film and theater students at the most prestigious institutions in the country.

In addition to the annual comedy confabulation, The Jack Oakie and Victoria Horne Oakie Charitable Foundation has sponsored four scholarships this year at UCLA/TFT.

Cartwright is best known as the voice of spike-headed underachiever ‘Bart Simpson,’ but also gives voice to “Ralph,’ ‘Nelson,’ ‘Todd Flanders’ and various others in the town of Springfield. In addition to her work on the THE SIMPSONS, currently in its 25th season, Cartwright has portrayed ‘Chuckie’ in the cable series RUGRATS, ‘Rufus the Naked Mole Rat’ in KIM POSSIBLE, ‘Todd’ on Disney’s THE REPLACEMENTS and many others for nearly three decades.