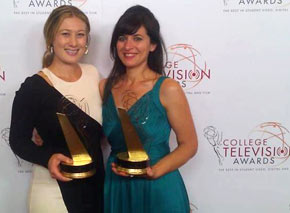 TFT was well-represented with two student winners at the 2013 College Television Emmy Awards held on Thursday April 25, 2013 at the JW Marriott LA Live. Susana Casares won best drama with her film "Tryouts" and Alethea C. Avramis won 3rd place in the comedy category with her film "The Foreigner."

"Tryouts" follows Nayla, a Muslim American girl who wants to join her new high school's cheerleading squad. The film explores the identity conflict that many teenagers go through when their parents have a different cultural and religious background from their peers and from the society they live in.

In "The Foreigner," a remote Greek village must raise its population in order to avoid being cut off from the local government. When a foreigner, Eric, stumbles into town, the village mayor rallies the hostile townspeople to convince Eric to stay.

Entries are judged online in preliminary and secondary panels on a secure server by members of the Television Academy working in each respective discipline. College Television Award winners are honored in Los Angeles and receive cash awards, industry recognition and the opportunity to network with top television executives.

The College Television Awards is a national competition recognizing excellence in college student-produced video, digital and film work. Entries are received from hundreds of colleges and universities nationwide and judged online by members of the Television Academy who are professionals working in each respective discipline.