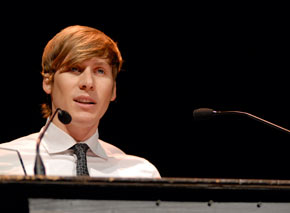 The award will be given to Black on Tuesday, April 30th at UCLA’s James Bridges Theater. The evening will include a screening of the Oscar-winning film "Milk," in addition to a Q&A with Black.

The Hunter/Zakin Chair Holder in Screenwriting Award was established in 1999 by San Francisco businessman Jonathan N. Zakin and requires that the recipient teach a ten-week screenwriting seminar at UCLA/TFT. Zakin is a member of the School’s Executive Board, and Lew Hunter is an emeritus professor in UCLA/TFT’s prestigious screenwriting program.

This past Fall quarter, Black taught a ten-week feature screenwriting seminar in which eight graduate students wrote their own feature length screenplay.

Black has won two WGA Awards for his work on HBO’s "Big Love" and an Academy Award for the hit film "Milk". His recent credit includes "8," a film reenacting the federal trial that led to an appellate court’s overturn of California’s Prop 8.