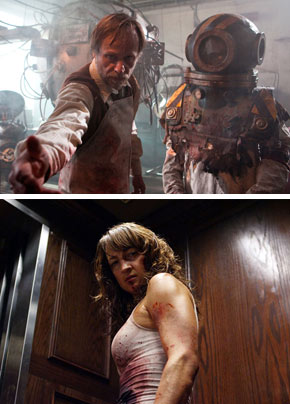 "Frankenstein's Army" and "Raze," two films from the Los Angeles-based production and sales company XYZ Films, have been selected to screen at this year’s Tribeca Film Festival.

With two films recently selected by the Tribeca Film Festival for its Midnight screenings, XYZ continues its momentum to impress international audiences. XYZ Films produced the horror pic "Frankenstein's Army," directed by Dutch filmmaker Richard Raaphorst, making this his feature film directorial debut. The story is set at the end of World War II about Russian soldiers who stumble across a secret Nazi lab, which has been experimenting with the journal of Dr. Viktor Frankenstein. In addition, XYZ Films is the sales agent for the gritty horror, action film "Raze," starring Quentin Tarantino’s favorite stuntwoman, Zoe Bell ("Kill Bill," "Grindhouse"). "Raze" follows two abducted women forced to do battle with other innocent women for the pleasure and amusement of unseen spectators.

If the genre-fan credentials of these projects seem impeccable, that’s in large part because the XYZ Films partners are fanboys themselves. “They’re the films we like best,” Tertzakian has said, “(and) they’re the films that perform best internationally. Genre films are a more digestible way to get financiers onboard with new talent."

XYZ Films partners were able to tap into the Internet’s fan grapevine in an inventive way, acquiring the global action and horror movie news site Twitchfilm.com, whose 40 worldwide correspondents keep them up to date and function as an army of savvy talent scouts. "The Raid's" Gareth Evans first came to their attention as a Twitchfilm discovery.