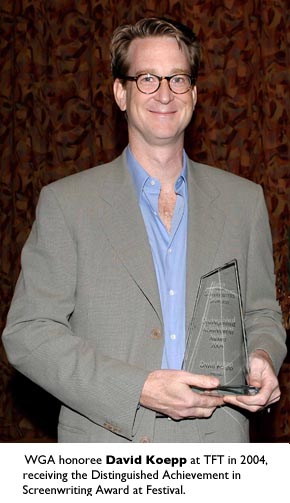 Posted on February 19th 2013 in Accolade

The award, established in 1992, honors a WGA member for his or her body of work as a writer in motion pictures or television.

"For the past 25 years," said Writers Guild of America East President Michael Winship in an official statement, "David Koepp has written an extraordinary variety of movies that have thrilled audiences around the world – whether the exploits of Indiana Jones, the terror of genetically engineered dinosaurs at Jurassic Park or the derring-do of the Mission: Impossible team.

"But more than those adventures, David has given us tales of character and emotion that capture and lift the human spirit. He is a consummate storyteller."

"I'm honored and very grateful to the WGAE," Koepp said. "To be mentioned in the same breath with the other people who've received the Hunter award gives me something to live up to -- it's a humbling and compelling reason to keep typing."

The Hunter Award was named in memory of longtime WGAE member Ian McClellan Hunter, whose more than 20 screen credits include "Eye Witness" and "A Woman of Distinction." Harassed by the blacklist in the 1950s, Hunter went on to write several successful television series under a pseudonym and then reemerged as a writer on many television projects, including "The Blue and The Gray."