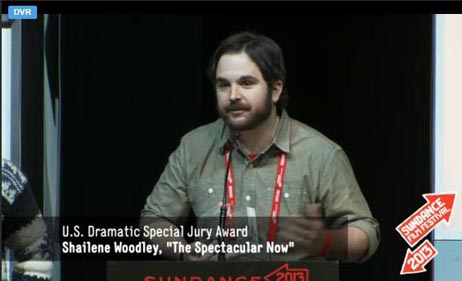 Posted on January 25th 2013 in Announcement

UCLA Professional Program in Producing grad James Ponsoldt took the stage at the Sundance Film Festival on Saturday to accept a U.S. Dramatic Special Jury Prize for Acting on behalf of Miles Teller and Shailene Woodley, the young stars of his new film, "The Spectacular Now."

The award citation, read by the British Film Institute's Clare Stewart, praised the work of these "two young actors, who showed rare honesty, naturalism and transparency and brought out the best in each other."

This was the second award-winning year in a row for Ponsoldt at Sundance. His marital drama “Smashed” won a Special Jury Prize in Park City 2012 for its producers, Jonathan Schwartz and Andrea Sperling, and was nominated for the Grand Jury Prize.

"The Spectacular Now," a romantic comedy written by Scott Neustadter and Michael H. Weber (“(500) Days of Summer”), described by Ponsoldt as "a young adult movie for grown ups," was one of the best-reviewed Sundance films of 2013.

"Ponsoldt shot the movie on 35mm film with long takes," noted IndieWire, "which makes it a welcome relief from trendy rapid cuts and artsy concept shots. 'I love unbroken emotional moments,' Ponsoldt said at the post-screening Q & A, which allowed him to capture 'what's happening in between the beats.'"

"'The Spectacular Now' benefits from an exceptional feel for its main characters on the parts of the director and lead actors," said "The Hollywood Reporter,"

According to critic Owen Gleiberman of "Entertainment Weekly," "There are hookups and dates, beer and sex, caustic discussions of divorce, a romantic triangle, and a senior prom. That said, The Spectacular Now is one of the rare truly soulful and authentic teen movies, like last year’s 'The Perks of Being a Wallflower,' or the classic from 24 years ago that this one most reminded me of: 'Say Anything.' Like them, it’s a movie about the experience of being caught on the cusp and truly not knowing which way you’ll land."

"The Spectaculalar Now" was acquired for distribution by A24 Films shortly after its Sundance screening. Ponsoldt's next film, for Fox 2000, will be an adaptation of the popular young adult novel "Pure," by Julianna Baggott. The story is set in a post-apocalyptic world divided into two societies: the Pures, who live under a dome and are healthy and beautiful, and the Wretches, those scarred by the devastation. In this world, Pressia, a Wretch on the run, teams up with the son of the leader of the Pures.