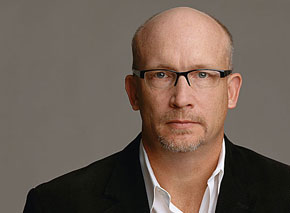 Oscar-winning alumnus Alex Gibney ("Taxi to the Dark Side") returns to Sundance with "We Steal Secrets: The Story of Wikileaks," an expansive documentary that explores not only the complex motives and personalities of leakers Julian Assange and Bradley Manning but also the profound questions their actions have raised about the ethics and even the possibility of secrecy in the digital age. The film includes footage from a wide-ranging one-on-one interview with Assange himself.

Gibney also directed a 3 minute documentary called "Speaking With Light" as a part of "Focus Forward Films," a new series of 30 three-minute stories about innovative people who are reshaping the world through act or invention directed by the world's most celebrated documentary filmmakers. "Speaking With Light" shines the spotlight on Dr Edie Widder who uses pioneering research with bioluminescent sea creatures to help us shine a light on the levels of pollution we’re producing above the ground. You can watch the film below!

The impressive list of Focus Forward international filmmakers - innovators in their own right - will marshal their talent and energy to deliver an authentic documentary film in their own voice. In the span of three minutes, these films will encompass everything from medical advances to economically viable "green"-powered homes to the development of wireless technologies in Third World countries, not to mention innovations in transportation and healthcare, gene therapy and waste management, or any other sphere of art and knowledge that inspires them.

Through their eyes you'll see how engineers, educators, inventors, surgeons, philosophers, social workers and others are utilizing their skills and vision to help sow the seeds of a better future.

Gibney participated in a "Hollywood Reporter" Live Google+ Hangout on Monday January 21, you can watch the recorded video below.