TFT and The Wrap Co-Host Reception at Sundance 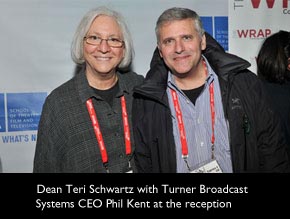 Posted on January 23rd in Announcement

The highly anticipated annual TFT Reception in Park City, produced for the first time in partnership with leading entertainment news website The Wrap, had a new venue this year at the refurbished Claim Jumper Hotel on Main Street, where a lavish CAA party took place the night before.

More than 400 festival guests attended the TFT event, with a line winding out the door.

"This year’s reception was dedicated to TFT’s remarkable alumni, who continue to inspire with their humanistic approach to storytelling, with many of their films shown at this year’s festival," stated Teri Schwartz, dean of the School.

"A record number of TFT students traveled to Park City this year, as a direct result of our latest strategic efforts to provide fresh opportunities and special workshops, in addition to adding newly created classes solely focused on festivals. I am honored to be a part of a School where our students and alumni continually support our initiatives, which was displayed by the large number of alumni and students who attended the reception to network with other alumni, industry leaders, and tastemakers." 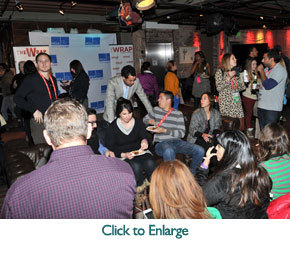 Several guests were slated to participate in the Monday afternoon TFT/The Wrap panel discussion “How to Make and Sell Your Independent Film in the Digital Age,” including Scilla Andreen, the CEO of IndieFlix, director and producer Richard Rosenthal, founder of Whitewater Films, Lynne Shelton, director of "Touchy Feely," Chris Williams, Chief Development Officer for Maker Studios, and producer Jonathan Dana.