TFT and The Wrap Co-Host Industry Panel at Sundance 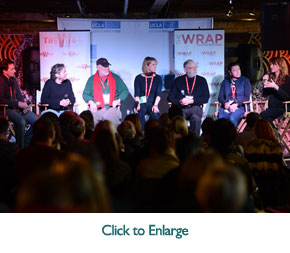 Independent film veterans and newcomers, from a variety of backgrounds, squared off, argued forcefully, and unexpectedly found common ground during the 2013 Sundance Industry Panel, "How to Make and Sell Your Independent Film in the Digital Age."

Co-hosted by TFT and The Wrap at The Claimjumper in Park City, the panel included such thoughtful independent film leaders as Scilla Andreen, CEO of IndieFlix, and Lynn Shelton, the acclaimed writer, editor and director of “Humpday” and "Touchy Feely" (in competition this year).

The most extensive account of the discussion, with many deep-dish quotations, was posted on the Yahoo News website, under the provocative headline, "Are filmmakers vain or nostalgic for wanting theatrical distribution?" 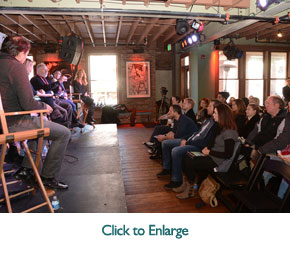 "I'm a sucker for the theatrical experience," insisted filmmaker Shelton. "I understand less and less people are watching films in theaters, but all the films I've made have been for theatrical release. I'm thinking of them on the big screen."

To panelists who argued that such an attitude was simply out of step with changes of technology and viewing habits, director Rosenthal cited historical precedent. "Film was the outgrowth of theater, “Rosenthal said, "which was a tradition of gathering a community, telling a story and experiencing it as a group. As our society becomes more and more wired, we think we're being wired together, and in fact we're being wired apart."

"I'm grateful for Netflix streaming. Way more people have seen 'Humpday' because of that," Shelton said, referring to her 2009 film starring Mark Duplass.

Still, she cautioned that watching a movie on your phone or computer only suits a certain type of movie. "'Lawrence of Arabia,' wouldn't work," she said.

Regardless of where the movies appear, their future comes down to the same question – how do you make enough money to do it again.”