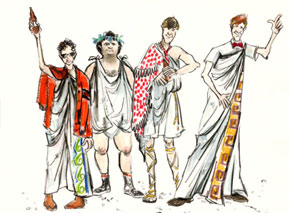 TFT Costume Design Professor and Oscar™-nominee Deborah Nadoolman Landis MFA '75, the Director of the David C. Copley Center for the Study of Costume design at the School, was a guest on the popular KPCC public radio program "Larry Mantel's AirTalk" on January 18.

The occasion was the publication of her seventh book, "Hollywood Sketchbook: A Century of Costume Illustrated,” the first work devoted exclusively to the elegant art of the costume illustrator.

A leading costume designer whose credits include "Raiders of the Lost Ark," "National Lampoon's Animal House" (pictured), "The Blues Brothers" and Michael Jackson’s seminal music video "Thriller," Landis recalls that when she was starting out in the costume shops of major Hollywood studios she found “stacks and stacks” of old drawings being treated as so much scrap paper, stuffed into walls for insulation, even being used as doormats. At that time, no one considered sketches of costume designs to be art.

Landis spent years combing through archives and private collections to unearth the long-unseen illustrations of Hollywood costume designs that are included in her book. She calls herself a costume archaeologist, the “Indiana Jones” of costume design, rescuing these painstaking rendered sketches from the dustbin of Hollywood history.

Listen to the full audio here or listen and read the full article on KPCC's website.