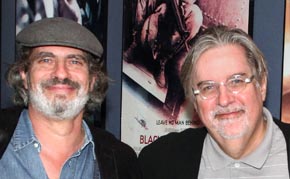 Posted on January 17th 2013 in Announcement

The Thirty-Seventh UCLA Entertainment Symposium, “Deals on the Edge,” will welcome several hundred participants on March 8-9, 2013, at UCLA’s Freud Playhouse, Macgowan Hall. A highlight of this year’s symposium will be a dialogue with cartoonist, screenwriter and executive producer Matt Groening, creator of "The Simpsons" and "Futurama" and the long-running cartoon strip "Life in Hell," and director, animator and TFT alumnus David Silverman ’79, MFA ’83.

Attorney Susan A Grode will moderate the conversation.

Silverman is sometimes referred to as the "founding director" of "The Simpsons." He was the first person to animate Groening's characters when they were featured in short clips on "The Tracey Ullman Show" in the late 1980s. He went on to direct most of the episodes that defined the show's style in its first three seasons, and later helmed "The Simpsons Movie" (2007).

Silverman has been nominated for an Academy Award™ in the Animated Short Film category for his 2012 theatrical release "Maggie Simpson in 'The Longest Daycare.'"

Co-founded and nurtured from its inception by TFT Associate Dean of Entrepreneurship and Special Initiatives, Barbara Boyle, the UCLA Entertainment Symposium has become a flagship event for the entertainment and legal industries, bringing together industry executives, agents, managers, producers, entertainment attorneys and students.

The two-day symposium will feature a broad range of panels exploring the changing landscape of the entertainment industry, as the rapid evolution of technologies, especially the digital revolution, is causing a re-examination of long established practices and assumptions. Panelists will address questions such as how to plan for the success of original content in the vast digital landscape, how to negotiate current TV deals and how to protect rights overseas.

Panelists will also discuss animation, global film financing and production opportunities, including an examination of the benefits and hazards of filmmaking in newly developing markets.

The panelists and moderators who will examine these issues include key executives from studios and production companies including Pixar, Illumination Entertainment, Warner Bros., leaders from digital companies including Yahoo! and representatives from top talent agencies including Creative Artists Agency. Independent producers, agents and media developers will also present their perspectives.