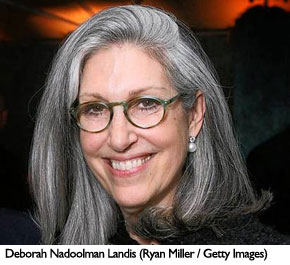 Posted on December 19th 2012 in Announcement

In a featured article in the "Los Angeles Times," TFT Professor and Oscar™-nominated costume designer Deborah Nadoolman Landis MFA '75 speaks forcefully about the essential role played by costume design's in the process of telling stories on film.

The creator of such iconic costumes as the jackets worn by Harrison Ford as Indiana Jones and by Michael Jackson in his "Thriller" video," Landis is the founding director of TFT's David C. Copley Center for the Study of Costume Design at the School.

An impressive blend of bold research initiatives and a robust program of conferences, the Center's exhibitions and film festivals further establish the profession's role in the industry, as well as creating a unique educational program for both undergraduate and graduate costume design students at TFT.

David C. Copley, The Center's generous patron and namesake, passed away in November near his home in La Jolla.

A portion of the "Times" article can be read below. The full text includes six key lessons Landis has learned during her career, from "Never take no for an answer" to "Tracking history never ends."

Designing costumes so ingrained in popular culture that they still inspire Halloween disguises 30 years after they were created — Michael Jackson's "Thriller" jacket, Indiana Jones' signature outback slouch look and the unforgettable "College" sweatshirt from "Animal House" among them — would be enough of a career accomplishment for most people.

But not for Deborah Nadoolman Landis, who has spent the last decade fighting for respect, recognition and a place in the Hollywood pantheon for film costume designers, establishing herself as the flagbearer for the profession in the process.

"Our job is often confused with diminutive stuff like shopping. But if you talk to costume designers, they want to have an intellectual discussion. They want to make great movies, not necessarily great costumes," she says. "We design from the inside out, not the outside in. We bring characters to life."