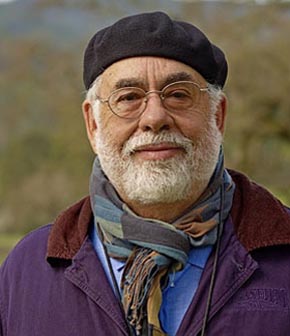 Posted on December 6th 2012 in Announcement

The Wrap reported exclusively on November 29 that one of TFT's most celebrated alumni, writer-director-producer and enbterprenuer Francis Ford Coppola MFA '67, has quietly opened an office on the studio lot at Paramount to begin work on a major new project.

"An individual close to Coppola said he was looking to get “creative” and would be moving into the Lubitsch building on the lot. Studio chief Brad Grey welcomed an overture to bring Coppola back to the lot, the individual said.

Coppola made the monumental “Godfather” series with Paramount, starting in the 1970s, at a time when studio executive Robert Evans (pictured with Coppola) collaborated with a group of iconic filmmakers, including Peter Bogdanovich, Hal Ashby, Terrence Malick and Roman Polanski on a series of landmark films.

Evans hired Coppola to direct the first “Godfather,” which was released in 1972, with an eye to bringing Italian-American authenticity to the Mafia story. Coppola resisted for that very reason but eventually embraced the challenge and went on to make a series of films that became among the most indelible of contemporary movie history, with Marlon Brando, Al Pacino, James Caan and many others.

Coppola also made the acclaimed auteur film “The Conversation” in 1974 and “Tucker: The Man and His Dream” in 1988 with Paramount.

The filmmaker and his American Zoetrope company have been based in San Francisco for many years. Coppola has spent much time growing a vineyard and a wine business in the Napa Valley, even as his family spawned a filmmaking dynasty with daughter Sofia and son Roman becoming filmmakers in their own right.

This year, Coppola executive produced “On the Road,” an independent film based on the Jack Kerouac novel that premiered at Cannes and opens domestically Dec. 21, and he made the experimental black-and-white movie “Tetro” in 2009.

Articles include speculation that the unnamed story is actually the science fiction film "Megalopolis," a dream project Coppola described several years ago to "Film Comment" magazine: "[It] is based in part on Roman history, because it takes a period in Rome just before Caesar. . . . I researched this period, taking the incident of the revolt of the Catiline, and I wanted to tell a story in a kind of Plutarch vision of New York as the Roman city, although it's not going to look like Rome, it's going to look like New York."