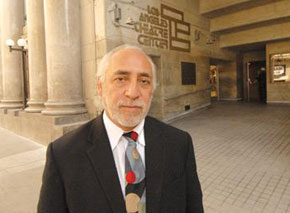 Posted on December 5th 2012 in Announcement

Rocco Landesman, Chairman of the National Endowment for the Arts (NEA), announced on Tuesday, Nov. 27th that The Latino Theater Company (LTC) will receive an NEA Art Works grant. The LTC is recommended for a $50,000 grant to support the 2014 National Latino Theater Festival and Conference.

TFT Professor and LTC head Jose Luis Valenzuela will be the festival's artistic director. His main goal is to create a national dialogue about Latino Theater by giving a diverse array of Latino Theater companies from across the nation a chance to showcase their work and get noticed on a national scale.

The festival will be housed at the LATC in downtown Los Angeles and will include the world premieres of ten recent plays produced by Latino theater companies from around the United States. It will run for 3 months in the spring of 2014 and have a budget of 1.2 million

"It's a big, big project, a time for each company to show their best work," Valenzuela [told the "Los Angeles Times"]said. "We're trying to create some sort of a movement, to begin a national dialogue."

Along with the plays, Valenzuela foresees panel discussions and theater workshops, carrying forward a broader conversation about the direction of Latino theater and the kinds of stories that need to be told to represent today's Latino experience.

"Most of the [Latino] companies don't travel, they're more production-oriented within their own communities, and we sometimes don't see their work or exchange ideas," Valenzuela said. "It's a way to create more understanding of the work going on in other cities."

Besides giving impetus to commissioning the plays, Valenzuela said, the NEA grant figures to give the nonprofit festival a helpful seal of approval as it seeks funding from other sources.

"The new theater-makers weren't even born. Now it's a broader landscape," Valenzuela said, and the 2014 festival will encompass artists and stories from all Latino-American backgrounds.

Valenzuela said the festival sprang from discussions among Latino theater leaders who met in Washington and Boston under the auspices of the Center for the Theater Commons, an organization that supports nonprofit theater. The process for choosing the plays and producing companies is still being honed, he said.

The play-picking process "has to be a very careful dialogue, so that people don't feel alienated from it, and they'll know they'll still be part of it," even if a given company's submission isn't chosen to be produced, Valenzuela said. "We want to know what writers are writing, how many stories are out there that haven't been told."

Organizers have begun compiling a database of Latino theater artists that now numbers 167 individuals, he said, with an eye toward canvassing the field for ideas and submissions.

"We know who the major ones are. People are trying to let us know who we should see and talk to, and who may be doing wonderful work off the radar," Valenzuela said. Festival selections are to be announced at a preliminary Latino theater conference tentatively scheduled for August 2013 at DePaul University in Chicago. Related Links: