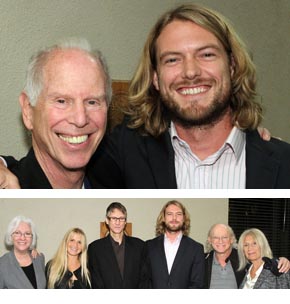 Posted on November 14th 2012 in Announcement

For over half a century the Samuel Goldwyn Writing Awards have been the key to success for hundreds of aspiring writers, including such critically-acclaimed TFT alumni as writer-director Allison Anders '86, cinematographer-director Carroll Ballad '63, writer-director Francis Ford Coppola MFA '67 (“The Godfather”) and screenwriter Eric Roth '73 (“Forrest Gump”).

Dean Schwartz praised the Goldwyns for their long-standing commitment to education, calling these "the most respected student awards throughout the UC system.” It has been especially gratifying that TFT, which prides itself on being “the storytelling school,” has fared so well at the Goldwyn Awards. This year, Stephen Wolf of UCLA won the third prize of $4,000 for his television pilot, “Emperor Watson,” and Honorable Mentions went to Kathleen Coggshall of UCSF for “Seventeen” and Marissa Matteo of TFT for “Lions and Men.” They received prizes of $2,000 and $1,000, respectively.

Other winners were: George Larkin of UC Berkeley, who received a Second Prize award of $7,500 for his stage play, “The Bastard Son of William Shakespeare.”

Speaking for his father, Samuel Goldwyn, Jr., Peter Goldwyn told the winners that they could expect to get many calls when the results of the awards were announced, “and the first question they will ask you is, ‘What else have you got?’ So the best advice I can give you is: Go home and write!”

The winners were selected by acclaimed producers Mike Medavoy (“Shutter Island”) and Debra Martin Chase (“The Princess Diaries”), and by award-winning journalist and “Los Anagles Times” film critic Betsy Sharkey, who did not attened.

In a prepared statement, Samuel Goldwyn, Jr., founder of the The Samuel Goldwyn Company and Samuel Goldwyn Films, said: "In keeping with the tradition my father started in 1955, The Samuel Goldwyn Foundation and the University of California are proud to support rising young screenwriters. We are happy to note that our winners have been able to use this award to launch their careers and make significant contributions to the industry."