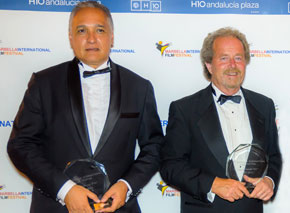 Posted on November 1st 2012 in Accolade

Alumnus Mark Chavez MFA '03 won the Best Animation award for his film "Vengeance + Vengeance" at the Marbella Film Festival, a five-day festival of more than 100 films, shorts and documentaries at The Andalucia Plaza Hotel in Puerto Banus, Spain.

The film is set in a science-fiction world where technology has leveraged politics and the military is controlled by corporations. It's a place where only the cleverest or the most brutal survive. The protagonist, Lily, is an athletic, intelligent research scientist whose nanotechnology specialization and its use in biomimetics and organic synthesis is employed by the Resnick Corporation.

She's discarded in a hostile wasteland where the results of diabolical genetic engineering have produced a distorted population of mutants. Who has put her there and why? Using intelligence and raw violence to overcome her adversaries Lily finds that all is not as it appears and that her challenges are more substantial than she thought.

The work is created in a game engine and executed interactively by blending the three design styles in a director driven authoring system. What is presented is the final outcome of the work where the design of the characters changes in volume and color tone to manipulate the viewer’s experience.

A contemporary adaptation of Richard Stark’s “The Hunter" (previously adapted with Lee Marvin as "Point Blank" and with Mel Gibson as "Payback") places an Asian female in the role of Parker. Set in a dystopian future where science has become the only key to domination and those who control it the rulers.

About the Filmmaker: Mark Chavez is an animation industry professional that has joined academia to experiment with emergent (hybrid) animation technologies. His professional experience includes work at major studios in interactive medias, broadcast television, and console games and feature films including Dreamworks Feature Animation. He has extensive experience in feature animation and live action visual effects, having worked on films including "Daredevil," "X2," "Elf," Dr. Seuss' "The Cat in the Hat," and more.