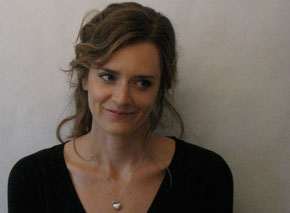 Posted on October 29th 2012 in Announcement

The Idiot Cycle, a feature documentary directed and co-produced by alumna Emmanuelle Schick Garcia MFA '03, was recently licensed by Al Jazeera and Singapore Airlines. The film was previously licensed by AB in France and Russia Today, and also won the Green Report Award.

The documentary alleges that six major chemical companies are responsible for decades of cancer causing chemicals and pollution, and also develop cancer treatments and drugs. It also argues these companies own the most patents on genetically modified crops that have never been tested for long term health impacts like cancer. The film was shot in a variety of locations, including Canada, The United States, The Netherlands, France, Italy, Germany, Belgium, England, and Northern Ireland.

Before "The Idiot Cycle," Garcia co-directed and edited "20 Ans Déjà," which was the most watched sports documentary on Canal+ and distributed by TF1. She is currently developing two comedy series and a feature comedy while attending the Université of Paris (Sorbonne) for a Master's in Film Law and Finance.

For more information on "The Idiot Cycle," check out the movie's Facebook Page.