VIDEO: Markevicius on his stirring documentary "The Other Dream Team" 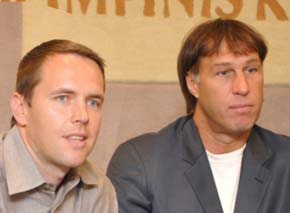 UPDATE: The Prodcers Guild of America announced November 30 that "The Other Dream Team" has been nominated for a 2012 PGA Documentary Award. Read more.

A graduate of Cal Berkeley's Haas School of Business and of the UCLA Producer's Program, Marius Markevicius MFA '02 went to the Sundance Film Festival two years in a row, representing distinguished indie films he had produced for writer-director Drake Doremus, "Douchebag" (2010) and "Like Crazy" (2011).

Both pictures were audience favorites in Park City, and "Like Crazy" came away with two of the festival's top awards, a Grand Jury Prize for director Doremus and a Special Jury prize for actor Felicity Jones.

And all through this busy three-year period, Markevicius was also at work on a passion project documentary, the critically acclaimed audience favorite "The Other Dream Team," serving as the film's co-writer, producer, director and off-camera interviewer. That made his third consecutive year with a film at Sundance a more personal triumph.

The showdown match Barcelona between the ex-Soviets and the first Lithuanian Olympic team in modern memory to compete under its own flag, when bitter memories of oppression were still fresh, stirred Markevicius when he watched it at age 16, as part of Los Angeles' large and patriotic Lithuanian community.

The Lithuanian language classes Markevicius resisted when he was growing up turned out to be a godsend later on, when he interviewed his still-imposing hoops heroes in their native language.

The Barcelona Olympics also saw the first integrated team in several generations fielded by newly liberated South Africa, with the nations' president, Nelson Mandela, in attendance. One description offered in the film reflects what people who were there surely felt, that this was "a cosmic turning point of history."

We spoke to Markevicius in October, 2012, when "The Other Dream Team" was still in the process of rolling out to movie theaters across the country.

Why basketball is the number-one sport in Lithuania

Markevicius' personal recollections of the 1992 Olympics

The long road to making "Dream" a reality

The moving political backstory of "The Other Dream Team"

"The Other Dream Team" homepage