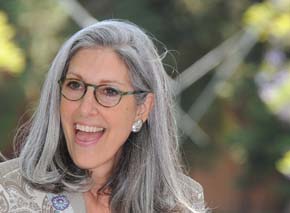 The glorious exhibit "Hollywood Costume," currently featured at London's Victoria and Albert Museum, and lauded by critics, is a crowning achievement for TFT Professor Deborah Landis, Oscar©-nominated costume designer and the founding Director of the David C. Copley Center for the Study of Costume Design.

The show occupies three large galleries at the museum and presents over 100 iconic movie costumes in innovative multi-media installations.

"This major new exhibition makes the case for costume as a crucial and neglected part of cinema," says London's "Guardian" newspaper in its rave review. "From Charlie Chaplin as the bowler-hatted Tramp to Meryl Streep's Margaret Thatcher in last year's ‘The Iron Lady,’ costume is such an integral part of film character that we sometimes don't notice it is there. All we see is the person being evoked. Deborah Nadoolman Landis, the exhibition's curator, argues that when film costume really works, it is 'not so much a change of clothes as a change of skin.'"

TFT Dean Teri Schwartz, who attended the show’s premiere black-tie gala during a recent trip to London, calls "Hollywood Costume" "as complete a show as one will ever see. It is a triumphant celebration of the integral role played by costume design in great cinematic storytelling. Deborah also has single-handedly reinvented what a museum show can be. She and the show are truly magnificent and I couldn’t be prouder for her remarkable achievement.”

In her introduction to the exhibit Landis asserts that “Costume designers are storytellers, historians, social commentators and anthropologists. Movies are about people, and costume design plays a pivotal role in bringing these people to life. 'Hollywood Costume' illuminates the costume designer’s process in the creation of character from script to screen including the changing social and technological context in which they have worked over the last century."