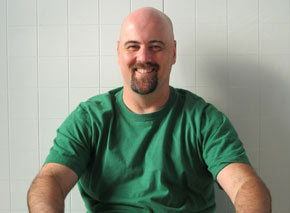 Posted on October 9th 2012 in Announcement

Alumnus Mike Stutz has taken to the screen to express his views on the human relationship with suicide and mental illness. His film, entitled "Don't Change the Subject," is scheduled for its world premiere at the Downtown Independent theater this Saturday October 13th.

Stutz found his mother unconscious on the ground one day when he was young - she had tried to kill herself by overdosing on her medication. She was admitted to a local hospital, but slipped into a coma and passed away 6 days later. After he found out that his stepmother's father had also killed himself, the idea for the film came to him and he felt driven to make it happen.

The film focuses both on psychoanalyzing his personal experiences and on interviewing others whose lives have been touched by suicide. The candor with which he approaches such a delicate issue is admirable, more so is his ability to bring humor to the story without trivializing an issue that provokes strong emotion from those it has affected.

A note from director Mike Stutz:

You want to stop a conversation quickly? Tell someone you’d like to make a funny movie about suicide. A sour look is followed by uncomfortable silence and a quick exit.

When I set out to make this movie I foolishly thought I was going to get off easy. I imagined I’d chat with a few celebrities who’d had some sort of suicide experience and then pepper in light hints about my own family experience using some of my comic writing from past work. It seemed so simple; a famous stand up comic cracks a few wise but thought provoking jokes, a renowned dancer reflects on his past work and how his mother’s suicide affected his view of the world, a rock star sings a poignant song and we’re done. I would nod and listen and we all would be just a little wiser without getting hurt. Then the celebrities, many of whom I had worked with before, all said no. It began to dawn on me that maybe not everyone feels like chiming in with extremely personal and often difficult stories about their lives. I also realized that I was avoiding the subject as well by trying to take the easy way and not delving into my own very personal experiences.

So, after a few rounds of cocktails, my incredibly talented team and I decided to take a different approach (thankfully the team did not say no, even if they probably should have) First decision: fuck the famous people. We talk to real people and ask them questions that come from my experience with my own mom’s suicide. Then we find incredibly talented but not so well known performers to give us their takes on how they would handle the subject. We create our own odd little suicide community of survivors, attempters, creators, destroyers, whatever, and let whatever happens happen while trying to avoid anything that seems precious or easy. Thus was born Don’t Change the Subject.

It has been by far the most enjoyable creative experience of my life. I got to make the movie the thirteen year old me would have wanted to see after my mom died. It’s irreverent in places, incredibly sad in others, yet still funny and fun and in a very weird way upbeat. This is because of the amazing honesty and candor of a lot of really incredible people. Thanks to them I also got to make this movie for my mom who, if she had the chance, might have made it herself.