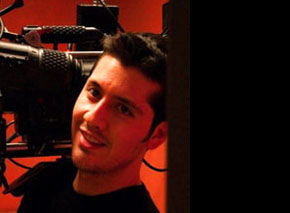 Posted on October 3rd 2012 in Announcement

Roberto Gudino MFA'12 is spending this year in Mexico City teaching low-income youth the art of cinematography. The trip is paid for in full by the U.S. Department of State, Bureau of Educational and Cultural Affairs as a result of Gudino receiving the United States-Mexico Commission for Educational and Cultural Exchange’s Fulbright-García Robles Fellowship last year.

His goals for the project include assisting youth in putting together a web series film project that will allow them to create more global visibility for issues in their communities. He also plans to keep a video log of his trip which will be posted on his website.

"The goal is to actually engage an audience online and to get them interested in the youth groups. Parts of these videos (will be about) … cultural attraction, food (and) how to get around the city," said Gudino. "I want to share the rich culture and heritage with others. What better way (to do this than) through video?" 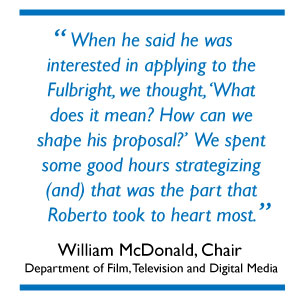 A distinguishing aspect of Gudino’s application was not only his goal of creating the web series but also his proposal to bring fellow colleagues, UCLA graduate students, to teach cinematography with him.

William McDonald, chair of the UCLA Department of Film, Television and Digital Media and mentor to Gudino, mentions this aspect as being specific to Gudino’s project and a great way to create a metaphorical and literal bridge to the youth of Mexico.

"When he said he was interested in applying to the Fulbright, we thought, 'What does it mean? How can we shape his proposal?' We spent some good hours strategizing (and) that was the part that Roberto took to heart most," McDonald said.

"I realized the importance of education through looking at the track of where my life was headed at the time … (when) I was working three jobs. I was still in this small border town … but I thought there was more (and that) maybe my life could be different," Gudino said. "Then I got accepted into the University of Arizona. I was in a new city and my life opened up."

In much the same way, Gudino hopes to use education through film to connect with the youth of Mexico City. Gudino said that he was careful to maintain an objective standpoint when connecting with a community of students he had had no interaction with before.

Despite the specific steps of his project, Gudino felt that the subject of these web series needed to be a relevant issue, determined by the youth themselves.

"When I came to Mexico, another thing I didn’t want to do was to assume the issues they were dealing with," Gudino said. "(I wanted to) find out what social issues are important to them, creating advocacy for issues that come up as I’m doing these workshops."