VIDEO: Dean Schwartz with alums Dayton and Faris at Orientation 2012 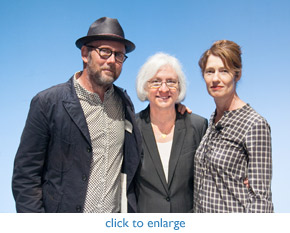 Posted on October 1 in Events

Ushering in the "Year of Participation” at TFT, Dean Teri Schwartz welcomed the married co-directors of the multi-Oscared© 2006 indie hit "Little Miss Sunshine," Jonathan Dayton '80 and Valerie Faris '80, to the Freud Playhouse during Orientation 2012. 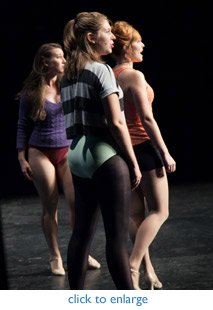 Heartfelt musical performances from the 2011 Ray Bolger Musical Theater production of "A Chorus Line," an iconic work for anyone pursuing a career in the performing arts, along with stirring speeches from department chairs William McDonald (Film, Television and Digital Media) and Michael Hackett (Theater), energized the School’s new and returning students on the verge the 2012-2013 academic year.

In her opening remarks, Dean Schwartz celebrated the many accolades won by TFT students and alumni during the extraordinary academic year just past, The Year of the Student. She then sketched out some new initiatives and collaborative special projects that will pave the way for further accomplishments in the year ahead.

Emphasizing her powerful watchwords, “No more silos, no more boundaries, no more barriers,” the Dean vowed to expand upon the accomplishments of the School's innovative interdisciplinary approach to entertainment and performing arts education, citing as an example an upcoming Master Class that will bring together Producers, Directors, Screenwriters and Cinematographers from the Department of Film, Television and Digital Media, with Actors and Costume and Scenic Designers from the Department of Theater, to create a series of short films, all under the guidance of famed actor (and UCLA alumnus) James Franco '08, along with numerous new, groundbreaking interdisciplinary classes and projects across both departments.

From among the Spotlight Award winners from the yearend UCLA/TFT Film Festival, two of the year's most outstanding films were screened, the note-perfect "Born to Dance This Way," by Jerrell Rosales, a parody of TV musical competition shows, and the thought-provoking "Chocolate Milk," a model for the use of stylized animation to tell a personal story.

In their Guest of Honor interview, alums Dayton and Faris talked about their strategies for working together as a directing team (preparation is key), and about charting a course from their early success as award-winning directors of music video and commercials to directing critically acclaimed feature films. TFT professor Barbara Boyle, Associate Dean for Entrepreneurship and Special Initiatives, interviewed the pair onstage and invited questions from the assembled students. Their strongest words of advice for young filmmakers was to insist that the script is ready before production begins. You will be told that story problems can be "fixed later," Faris warned, but this is almost never the case.

Watch the trailers for this year's selected student films:

TRAILER: "Born to Dance This Way"