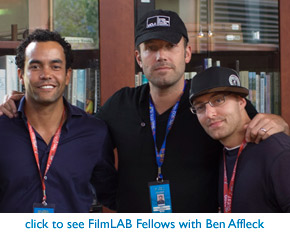 In 2011, TFT and the Telluride Film Festival launched an extraordinary new partnership, a unique collaborative educational venture between an elite professional school of entertainment and performing arts and one of the world's great festivals.

The first phase of the project, FilmLAB, launched in 2011, offered ten outstanding graduate film students from TFT, known as FilmLAB Fellows, the opportunity to attend the Festival, to see films from around the world and to learn from the great filmmakers in attendance, in a series of unique and intimate workshops created expressly for them.

Now in its second year, FilmLAB is designed to energize a new generation of young artists around the power of storytelling in film.

This year's FilmLAB Fellows discussed the art, craft and philosophy of moviemaking in intensive, seminar-style discussions with a once-in-a-lifetime array of gifted artists that included: actor-director Ben Affleck, whose satirical thriller "Argo" had a sneak preview screening; actress and Telluride resident Laura Linney, representing “Hyde Park on the Hudson,” a biographical film in which Bill Murray portrays FDR; producer Bonnie Arnold (“How to Train Your Dragon”) and world-renowned theater director Peter Sellars, along with award-winning documentarian Ken Burns.

At an especially powerful event, documentary filmmaker Errol Morris joined director Joshua Oppenheimer for a panel discussion about his controversial film “An Act of Killing,” a docu-drama that featured interviews with unrepentant perpetrators of genocide in Indonesia. 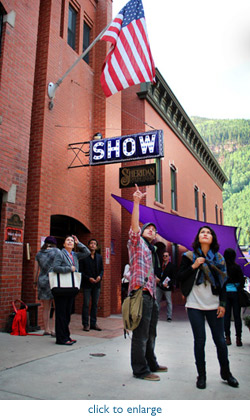 TFT alumnus and Executive Board Member Frank Marshall ’68, the famed producer of dozens of classic films, from the Bourne series of films to “Raiders of the Lost Arc” to “War Horse,” and a long-time Telluride patron, serves as FilmLab’s Founding Sponsor.

"Frank is passionate about film and education," says TFT Dean Teri Schwartz, “and this initiative brings those two concerns together in a really brilliant way. The purpose of the initiative is to kindle a sense of possibility in these grad students for their future careers and to place them in a position to be a vital part of the very finest of the international filmmaking community.

For TFT Professor and alumna Nancy Richardson MFA ’96, who is FilmLAB’s faculty advisor, Telluride is the perfect partner for such an educational venture. "Telluride is not a market and it doesn’t have the hype and the press of some of the other festivals," she says. "It’s a festival devoted 100% to the love of great movies. Participating in that experience helps students rededicate themselves to the power of their chosen medium.”

A case in point is provided by TFT animation student and FilmLAB Fellow Kartika Mediani, who says she was especially inspired by the student films and filmmakers she encountered at the Festival. "I could see that the films they made were truly films they wanted to make, and they were all really good and original. Seeing them reminded me again to stick to what I really want to do and to grow as an artist, to tell stories I really want to tell in this medium of art, to make the films I really want to make."

"The twenty-four films shown at Telluride all told amazingly compelling stories," said Fellow LA Ross, "and in unique and provocative ways. I feel reinvigorated by the bold and daring ways the filmmakers at Telluride chose to tell their stories."

A theme that emerged over the course of the Festival, Richardson said, was "personal stories set against backdrops of political upheaval, from 'Argo' to 'An Act of Killing.' A standout was Sally Potter’s 'Ginger & Rosa,' in which Elle Fanning plays a character obcessed with protesting against the bomb, because it makes her feel she has no future. The issue that seemed to matter most to many of the filmmakers was, 'How does one individual function within a context of political turmoil?' The issue these films raised for young artists was, 'As a filmmaker, how am I going to contribute to what's happening? Where do we stand and who gets involved and how?'"

"The programmers certainly had their finger on the pulse of the social environment," agreed Fellow Kyle Laursen, "picking up on an onslaught of political breakdown." These films sparked lengthy after-hours discussions, Laurson said, among the Fellows and between the Fellows and their hosts. "I was impressed by the clarity and the focus of the political positions in some of these films. Rather than feeling pressured to agree with them, I was inspired to bring more clarity to my own positions."

"Telluride might be only one long weekend," said Mediani, "but it will certainly be a very significant part of my journey as an aspiring artist and storyteller."