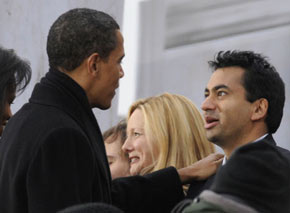 Posted on September 5th in Announcement

Harold and Kumar alumnus Kal Penn, who was once an Obama campaign and White House staffer, is once again working closely with the Democratic Party. In addition to delivering a short address at the opening night of the Democratic National Convention, he will also host "Live From Charlotte," a convention special that will be aired exclusively online tomorrow, Thursday September 6th, at 8PM ET (5PM PT).

The special will include interviews with both campaign officials and special guests such as Aisha Tyler, Elizabeth Banks, Olivia Wilde, Fran Drescher and Zach Braff. In the promotional video for "Live From Charlotte" released Monday (below), Penn and his "Harold and Kumar" co-star John Cho are chilling on a couch watching TV, surrounded by cheetos, half-eaten pizza and orange soda while Penn receives an important call from the Commander in Chief.

Penn began his acting career in several indie films including "Namesake." His breakthrough film role came in the comedy "Harold & Kumar Go to White Castle" in 2004, and several Harold & Kumar films have followed. He went on to appear for 2 years in the television series "House M.D."

He developed an interest in politics from his grandparents who marched for India's independence, and in 2009 asked that his character on "House" be killed off so that he could join the Obama administration as an associate director. He went on to become the associate director in the White House's Office of Public Liaison and Intergovernmental Affairs.

You can view his speech from the opening night of the convention below, and tune in to watch "Live From Charlotte" at Thursday September 6th, at 8PM ET (5PM PT) on http://www.barackobama.com.