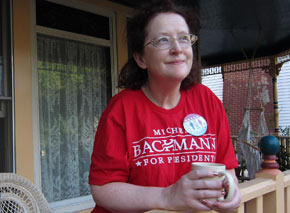 Posted on August 31st in Announcement

"The film creates a thought-provoking political (non?)fiction as she follows the journey of an "ordinary" woman who offers us an insider's look at the American heartland's ultra-right-wing movement.

Janeane Wilson is an Iowa housewife who is proud to consider herself a patriotic, God-fearing, conservative American. Though her husband Fred's job as a truck driver frequently takes him out of town for long stretches, Janeane keeps busy at home: in the garden, at a women's Bible study group, and as a local political activist.As the 2012 presidential election approaches, Janeane is eager to do her part as a responsible citizen by attending and participating in campaign rallies for Republican nominees in the lead-up to the Iowa caucus.

Her biggest concern is finding a candidate who will be committed to repealing Obamacare, Planned Parenthood and other leftist initiatives that are, in her view, destroying the country she loves. She travels around to various campaign stops in the Des Moines area, listening raptly to sound bites doled out by GOP candidates Michele Bachmann, Rick Santorum, Mitt Romney, Ron Paul, Rick Perry and Newt Gingrich. But the ongoing recession takes its toll, and economic and medical crises cause a radical upheaval for Janeane. Her faith is put to the test as her once staunchly held conservative beliefs no longer seem to satisfy the unanswered questions in her life.