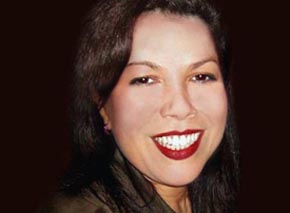 Recent TFT graduate Evette Vargas MFA ’12 has announced that rocker turned radio personality and actor Henry Rollins (“Sons of Anarchy”) will be joining the cast of her hybrid web and television series “Dark Prophet.” Vargas is writing and executive-producing the series and will direct the pilot episode this summer.

“’Dark Prophet’ is a hybrid between a webseries and a TV series,” Vargas says. “I've basically created a one-hour TV pilot and a one full season of a webseries simultaneously. I've written it as a one-hour TV pilot and shot it as such. Each television act is my full-length webisode, but, then I further tailored each webisode for online, where short-form storytelling works best. Both the TV series and webseries can stand alone, or compliment each other. The TV series has is own unique twists and turns, as does the webseries.”

A sneak peak of the series was screened at the Writers Guild of America Writer/Director Short showcase on July 18th, 2012. Vargas is CEO of Digital-Reign, an award winning Production Company specializing in high-impact visual media.