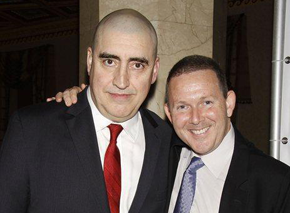 "Gladiator" and "Hugo" Screenwriter John Logan, honored for excellence in screenwriting during the Screenwriters Showcase at the 2012 UCLA/TFT Film Festival, brings a new production of his Tony™ Award-winning play "Red" to LA's Mark Taper Forum. The play is a fictional account of artist Mark Rothko in the late 1950s, an angry and egotistical artist whose work was not fully appreciated until after his death by suicide in 1970.

Ben Brantley of The New York Times said the play "initially registers as a visceral exercise in art appreciation. Fortunately though, it turns out to be more a study in artist appreciation, a portrait of an angry and brilliant mind that asks you to feel the shape and texture of thoughts."

Below is an excerpt from a review of a recent performance of "Red" by Leon van Nierop. Click here to read the full review.

This steely and powerful play exposes the intense and often self-destructive heart of the artist as a beast. It examines the relationship between the controversial painter Mark Rothko (Michael Richard) and his assistant, Ken (Jeremy Richard). We know almost as much about the young novice as the artist does.

During the production Rothko rages, rants and teaches the young man about art, but often seems to wander off into soliloquies and his own ego, kept firmly in control by the director Steven Stead. During his quarrels with himself and collisions with his own ego and soul, he muses about the state of art. What exactly is an artist? Is there still real meaning to be found in art? Does art represent the same to Rothko as to the viewer in this case patrons in a restaurant? Who does he paint for? For himself? For the gods and muses? For an intended audience? To make money? Or does he paint with aggression and fervour to console and finally destroy the devils inside him that are threatening to burn him up?

During this intense and intellectually exhausting two hander, Rothko philosophises about art, explores new ways of reinventing it and bringing about something fresh, while re-examining old ideas, his own ego and the meaning of colour. He also scrutinizes his own emotions during the creative process.